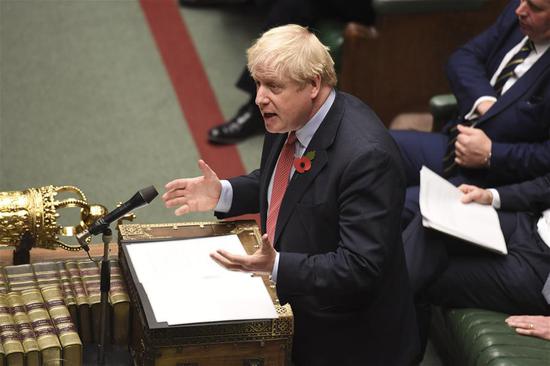 British Prime Minister Boris Johnson speaks at the House of Commons in London, Britain, on Oct. 29, 2019. Britain looks set to hold the general election on Dec. 12 after lawmakers on Tuesday night voted to back it following months of Brexit deadlock. (Jessica Taylor/UK Parliament/Handout via Xinhua)

Britain looks set to hold the general election on Dec. 12 after lawmakers on Tuesday night voted to back it following months of Brexit deadlock.

Legislators voted 438 to 20 to endorse the British government's bid for the general election to be held on Dec. 12.

The bill needed only a simple majority to pass, unlike Monday's attempt which needed two-thirds of MPs to back it. On Monday, European Union leaders have agreed in principle to delay Brexit until Jan. 31, 2020.

The vote outcome is a victory for British Prime Minister Boris Johnson, who has suffered repeated defeats over his Brexit bids in the House of Commons since taking office in July.

The bill, after getting through the House of Commons, will be sent to the House of Lords, but it is unlikely to face significant opposition there.

If approved, it will be the first time for the United Kingdom to go to the polls in December in nearly 100 years. It is also a British tradition to hold the general election on Thursday.

Just hours before the crucial vote, which took place shortly before 20:00 GMT, 10 of the 21 Tory lawmakers expelled from the party were re-admitted into the Conservative Party. They were kicked out after voting against the party on Brexit.

"They have had the whip offered back to them, they have accepted the whip: they are Conservative Members of Parliament with the Tory whip," a Conservative Party spokesman said.

The vote came on the heels of lawmakers voting 295 to 315 to reject a Labour amendment for the general election to be held on Dec. 9.

Labour announced that its conditions to back an early election, centered around ruling out a no-deal Brexit, had been met.

Also on Tuesday night, Jacob Rees-Mogg, leader of the House of Commons, stated that parliament will be dissolved at 00:01 GMT next Wednesday.