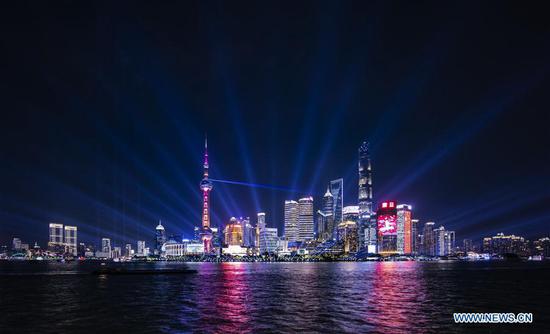 China will roll out a guideline to better use foreign investment with a focus on safeguarding the national treatment of foreign-funded enterprises.

The guideline, which was adopted in principle at an executive meeting of the State Council held on Oct. 16, puts forward 20 policies in four aspects to create a more "fair, transparent and predictable" business environment for foreign-invested enterprises, said Vice Minister of Commerce and Deputy China International Trade Representative Wang Shouwen Tuesday.

For a start, in deepening opening-up, China will continue to reduce the negative list for foreign investment access in the national and pilot free trade zones, and comprehensively eliminate restrictions that are not on the negative list.

China will accelerate the opening-up of the financial sector and optimize the foreign investment policies for automobiles, Wang said.

Second, in promoting investment, China will optimize the scientific and technological innovation services for foreign-invested enterprises and improve the construction of pilot free trade zones.

Third, in deepening reform to facilitate investment, China will lower the cost of cross-border capital use, make it easier for foreigners to work in China, and optimize the approval process for the use of land for foreign-funded projects.

Fourth, in protecting the legitimate rights and interests of foreign investors, China will fully implement the foreign investment law, establish and improve institutions for accepting complaints.

China will give full play to the role of judicial protection of intellectual property rights (IPR), improve the IPR protection mechanism, support both domestic and foreign enterprises in their fair participation in standardization, and ensure their equal participation in government procurement, Wang said.

The guideline requires that all local governments and departments shall not discriminate against foreign-funded enterprises in aspects like the release of government procurement information, and shall not restrict the ownership form, organizational form, equity structure or investor country, as well as product or service brands of suppliers.

The Chinese government has been committed to establishing a level playing field in the government procurement system, said Wang Shaoshuang, an official with the Ministry of Finance (MOF).

If foreign-funded enterprises are not treated equally, they may raise complaints with the procurer, and if the procurer fails to give a reply within the time limit, or if the supplier is dissatisfied with the reply, he or she may lodge a complaint with the financial department at the same level, said the MOF official.

To maintain a level playing field in the market, foreign-funded enterprises that do not participate in the government procurement can also report to the MOF if they find unfair practices, he said.

China has strengthened its IPR protection with unprecedented intensity in recent years, said Zhang Zhicheng, an official with the National Intellectual Property Administration.

For example, to deter firms from infringing upon IPR, China has been working to improve the system of punitive damages for infringement, Zhang said.

Meanwhile, China has raised the efficiency of its approval process for trademark patents. At present, the average approval cycle for invention patents is just under two years, and the time of approval for trademark registration averages less than five months, Zhang said.