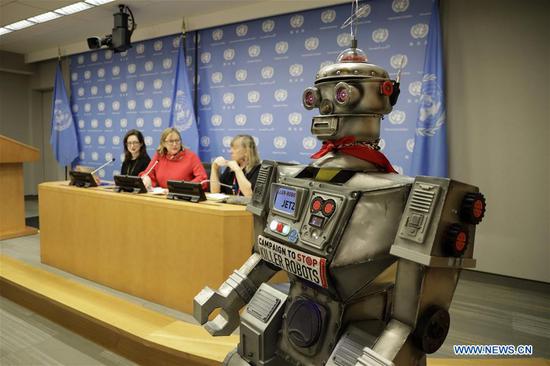 "We believe that they (killer robots) cross the threshold of acceptability and therefore must be prohibited," she said at a press conference held at the UN headquarters in New York.

"Killer robots or lethal autonomous weapon systems are crossing a moral and ethical Rubicon and should not be allowed to exist and be used in combat or any other way," said Jody Williams, the founding coordinator of the International Campaign to Ban Landmines (ICBL) from early 1992 until February 1998.

"I think that they were hoping and really expecting the larger community would not find out about the research and development of killer robots," she said.

"If we allow autonomous weapons to deploy and select and engage with their own targets, we will see disproportionate false fatalities," said Liz O'Sullivan with the International Committee for Robot Arms Control (ICRAC).