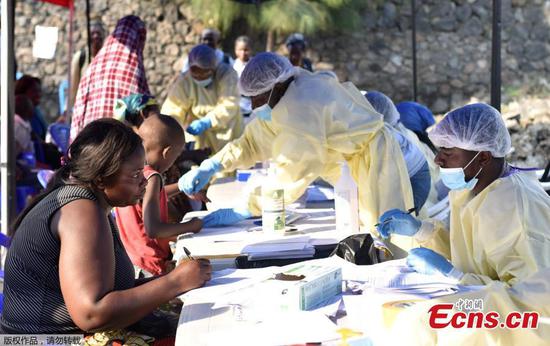 The death toll from the ongoing Ebola virus outbreak in the Democratic Republic of Congo (DRC) has climbed to 2,150, according to the latest figure from the Africa Centers for Disease Control and Prevention (Africa CDC).

The Africa CDC - a specialized agency of the African Union (AU) - recently disclosed that the death toll from the Ebola crisis in DRC to have reached 2,133 as of early this month.

Its latest periodic update regarding the deadly outbreak's status showed that the death toll has climbed to 2,150 as of October 13.

The number of people recovered from the deadly virus also increased from 991 people as of September 29 to 1,033 as of last week, in which the overall Ebola fatality ratio has remained constant at 67 percent, it was noted.

The 55-member pan African bloc, through the Africa CDC, also urged its member countries as well as international and private organizations to exert concerted efforts against the Ebola virus outbreak in the DRC and its neighboring countries.

The AU had also on October 15 convened a fundraising forum of African private sector and partners forum, dubbed "Africa Against Ebola," that aimed to support the ongoing response against the Ebola virus outbreak in the DRC.

The AU also disclosed that it will mobilize up to 600 local health workers and community volunteers to reach out the most remote corners of affected health areas and zones, to address the critical challenges of community engagement and ownership.