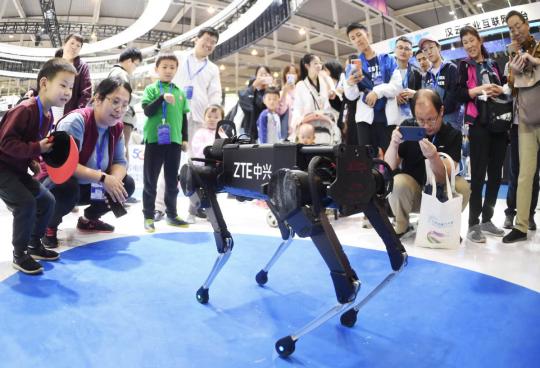 Visitors look at a robot developed by ZTE Corp during an industry expo in Nanjing, capital of Jiangsu Province. (Photo by Cui Xiao/For China Daily)

Investment in the telecommunications, media and technology (TMT) industry will continue to grow in the short term, and further drive the increase of investment value, owing to the implementation of preferential tax policies for venture capital investment and tax reduction for micro and small-sized businesses, according to a new report released by global accounting firm PwC.

The number of large-sized deals decreased in the first half of 2019, with only 29 deals involving a single deal value of over $100 million, half the number compared to the second half of 2018.

Gao Jianbin, PwC China TMT leader and Central China private equity group leader, explained the lack of large-scale and high-quality deals at the supply end was the main factor leading to the decline in investment value in the first half of this year.

"For investors, the continuous stimulus from national policies reducing taxes and fees, expanding opening-up and encouraging scientific and technological innovation, especially the launch of the sci-tech innovation board or STAR Market, will undoubtedly be the highlights of the venture capital market in 2019," said Gao.

The implementation of these policies and the subsequent performance of the STAR Market will affect whether investors would enter the next round, according to Gao.

The report also said the internet and mobile internet industry remained at the top of the list in terms of investment value in the first half of 2019, with 651 deals generating a total value of $7.7 billion. The technology subsector had the largest deal volume, with 866 deals collecting a deal value of $6.5 billion.

Charline Ni, PwC China technology leader, said since the State Council upgraded its mass entrepreneurship and innovation campaign in September 2018, related policies have been launched frequently, and scientific and technological innovative enterprises are ushering in a golden period of development.

"In the first half of 2019, stimulated by favorable policies, investments in IT services, semiconductors, electronic and optoelectronic devices continued to rise. IT, artificial intelligence, machinery manufacturing and integrated circuits are expected to draw investors' attention," said Ni.

Moreover, the number of PE/VC deals involving startups accounted for 47 percent of the total in the TMT industry in the January-June period, the highest among all categories. Companies in the expansion phase received the most investment value, accounting for 63 percent, reaching the highest point in three years, the report said.

"Since the official launch of STAR Market, a number of scientific and technological innovation enterprises have been listed successfully, and are expected to enter the dividend period of investments and exits," said Vincent Cheuk, PwC China South assurance markets leader and Southern China private equity group leader.

Cheuk said that Shenzhen, as one of the core cities to drive the construction of the Guangdong-Hong Kong-Macao Greater Bay Area, has seen investment growing rapidly in terms of both volume and value.

Furthermore, China will build the southern city of Shenzhen into a pilot demonstration area of socialism with Chinese characteristics, and further optimize the business environment of Shenzhen, which is another advantage for Shenzhen's venture capital market, and investment activities in the city are expected to be greatly enhanced, he added.