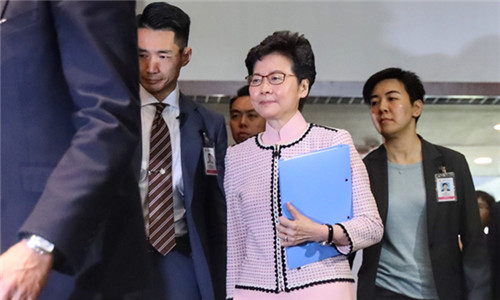 Any acts that advocate Hong Kong's independence and threaten China's sovereignty, security or development interests will not be tolerated, Hong Kong Chief Executive Carrie Lam Cheng Yuet-ngor said on Wednesday morning in her annual policy address, which was disrupted by protest within the Legislative Council.

Lam reiterated her commitment to adherence to the "one country, two systems" principle as Hong Kong finds ways to "emerge from the storm and embrace the rainbow" amid prolonged chaos across the city.

Lam said the principle has proved to be the best system for ensuring the long-term prosperity and stability of the Hong Kong Special Administrative Region since its return to the motherland 22 years ago.

Lam stressed the importance of safeguarding the rule of law, which she said is "a core value of paramount importance to Hong Kong" and the cornerstone of the city's success.

A video of her full policy address, the third of her tenure, was broadcast for the public in the afternoon and on the SAR's Policy Address website.

"When the circumstances allow, I will go to the Legislative Council again to further introduce the content of the policy address," Lam said in the video.

Housing and land supply topped the agenda of her address.

"Housing is the toughest livelihood issue facing Hong Kong society. It is also a source of public grievances," she said.

To meet the housing demands of the public, the SAR's government must increase the supply of land for housing development in a persistent manner.

She proposed a government-led approach for the planning of land use and infrastructure and the resumption, or seizure, of private land needed for public purposes.

Lam announced that a steady stream of land resumption projects under the Lands Resumption Ordinance are in the pipeline.

"There will be a 16.7 percent to 25 percent increase in the working-hour-linked household allowance under the program, while the child allowance will be raised substantially by 40 percent," she said.

Lam said Hong Kong is now facing the most formidable challenge since its return to the motherland on July 1, 1997. More than 400 demonstrations, processions and rallies have taken place in various districts in the past four months, and they frequently ended in violence. More than 1,100 people have been injured and 2,200 arrested, Lam said.

Hong Kong lawmaker Regina Ip Lau Suk-yee spoke highly of Lam's policy address, saying it was "praiseworthy" that she delivered it under such difficult circumstances.

Nonofficial members of the Executive Council recognized Lam and her government's efforts in solving deep-seated problems in the city, saying Lam's policy address demonstrates the SAR's "care for the people".

"We believe that the chief executive has the determination and capability to take forward initiatives that are beneficial to Hong Kong's economy and people's livelihoods," Executive Council Convenor Bernard Chan said. "The Executive Council fully supports the government and will continue to offer its advice on the implementation of measures for improving people's livelihoods."

In the United States, meanwhile, the House of Representatives passed three bills related to Hong Kong on Tuesday.

One of the proposed bills deals with what it calls China's "intrusions" into Hong Kong's affairs and says the U.S. "supports" the protests there. Another requires annual reviews, by the U.S. secretary of state, of Hong Kong's special economic and trade status. The third bill would ensure that U.S.-made weapons are not being used against protesters by police.

On Wednesday, Foreign Ministry spokesman Geng Shuang said China will take countermeasures to safeguard its sovereignty, security and development interests in response to what he said was the "wrong decision" by the House.

Geng warned that if the Hong Kong Human Rights and Democracy Act of 2019 becomes law in the U.S., not only will China's interests and Sino-U.S. relations suffer, but also the interests of the U.S..

The bill awaits a vote in the Senate. If it is passed there, U.S. President Donald Trump's signature would be required for it to become law.

Geng said the bill showed a U.S. double standard, the hypocrisy of some people in the U.S. regarding human rights and democracy issues, and their wicked intentions regarding Hong Kong and efforts to contain China's development.

Geng urged Washington to understand the situation clearly and to immediately stop advancing the act and interfering in China's internal affairs.

Pro-establishment members of the Hong Kong Legislative Council issued a statement on Wednesday that said, "We strongly object to the House of Representatives' attempt to grossly interfere in the domestic affairs of Hong Kong and to promote the political interests of their proxies in Hong Kong."

"The Hong Kong Human Rights and Democracy Act of 2019, which was approved by the House of Representatives in such biased and unfair conditions, would only result in a lose-lose outcome for all parties concerned," the statement said.

Also on Wednesday, Yang Guang, spokesman for the Hong Kong and Macao Affairs Office of the State Council, made serious protest regarding, and strongly condemned, the House's passing of the proposed act.

Yang said the move was a gross intervention in China's internal affairs, a blatant backing for the Hong Kong opposition and violent radicals, and a full revelation of the political calculations of the U.S. House of Representatives and some politicians who attempt to contain the development of China through playing the "Hong Kong card".

He noted that some protesters have wantonly beaten people, vandalized and destroyed and looted property, including public facilities, and caused serious traffic obstructions.

Hong Kong's Legislative Council chambers were recently repaired after being vandalized by protesters on July 1.

The escalating violence is inescapably related to the overt or covert support from the U.S. for anti-China troublemakers in Hong Kong, Yang said.