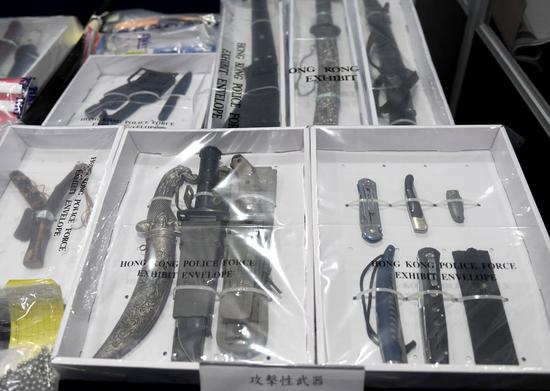 The Hong Kong police said Wednesday they had seized explosives in several cases before and after one homemade bomb was detonated near a police vehicle on Sunday.

In a press conference, the police said evidences have shown that rioters in the months-long violence were planning lethal attacks similar to terrorism.

The arrests followed a remote-controlled homemade bomb was detonated near police officers who were clearing roadblocks set by rioters on Nathan Road, Kowloon, on Sunday. Police said it was the same explosive device used by terrorists all around the world. 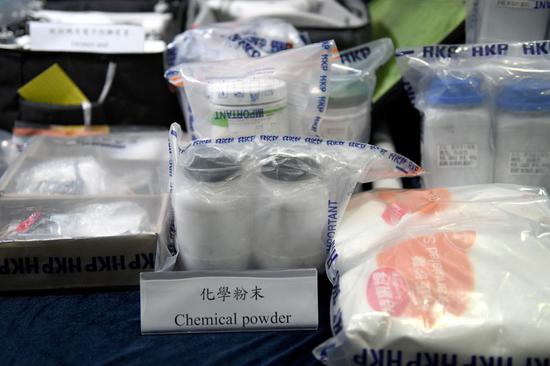 The Hong Kong police show at a press conference on Oct. 16, 2019 the materials used to make petrol bombs which were seized recently. (Xinhua)

Chou said three drones and projecting devices, as well as knifes and smoke shells, were also confiscated during the Tuesday swoop. The superintendent said using drones to project dangerous objects in densely populated places could cause heavy casualties.

The police have seized explosives or bomb-producing materials in several cases since July. On July 20, explosives, fire bombs and offensive weapons were found in a building in Tsuen Wan. On Aug. 1, materials for making explosives were seized inside a residential building in Tin Shui Wai.

Suryanto Chin-chiu, superintendent of the Explosive Ordnance Disposal Bureau, warned that homemade bombs are unstable and could explode during production and transportation, posing a big threat to public safety.