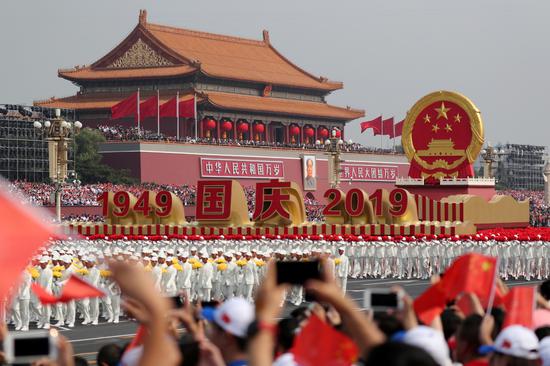 A float featuring China’s national emblem travels past Tian’anmen Gate during a parade marking the 70th anniversary of the founding of the People's Republic of China, on its National Day in Beijing, China October 1, 2019. (Photo/China Daily)

No force can ever shake the status of China or stop the Chinese people and nation from marching forward, President Xi Jinping said on Tuesday.

Xi, also general secretary of the Communist Party of China Central Committee and chairman of the Central Military Commission, made the statement in his address at the grand gathering in celebration of the 70th anniversary of the People's Republic of China.

Standing at the Tian'anmen Rostrum in Beijing, where chairman Mao Ze­dong announced the founding of the PRC on October 1, 1949, Xi recalled the revolutionary forefathers and martyrs for their deeds in pursuing national independence and liberation, a stronger and more prosperous country and the people's well-being, and he rolled out a road map for the country to realize the Chinese dream of national rejuvenation.

Xi said that the founding of the PRC reversed the country's plight of poverty and weakness, of being bullied and humiliated for over 100 years since the advent of modern times, and that the Chinese nation has since embarked on the path toward national rejuvenation.

The past 70 years have witnessed great achievements of the Chinese people of all ethnic groups, made through concerted efforts and arduous struggle, Xi said, and socialist China has firmly stood up in the East.

"On our journey forward, we must uphold the principles of 'peaceful reunification' and 'one country, two systems', maintain lasting prosperity and stability in Hong Kong and Macao, promote the peaceful development of cross-Straits relations, unite all China's sons and daughters, and continue to strive for the motherland's complete reunification," Xi said.

The president pledged that China will continue to follow the path of peaceful development and pursue an opening-up strategy based on mutual benefit.

"We will continue to work with people from all countries to push for jointly building a community with a shared future for mankind," he said.

Xi urged the People's Liberation Army and the People's Armed Police Force to always preserve their nature, purpose and true character as the forces of the people, and he emphasized that they resolutely safeguard China's sovereignty, security and development interests, and firmly uphold world peace.

He underlined the importance of upholding the leadership of the CPC, ensuring the primary status of the people and adhering to the path of socialism with Chinese characteristics. He called for constant efforts to meet the people's aspirations for a better life and to keep making historic achievements.

China's past has been inscribed in human history and China's present is being created by hundreds of millions of the Chinese people, Xi said, adding that "China will surely have an even brighter future".

He called on all members of the Party and the armed forces and people of all ethnic groups to unite more closely, build on existing achievements and continue to better develop the country.

Unwavering efforts should be made to achieve the "Two Centenary Goals" and to realize the Chinese dream of the great rejuvenation of the Chinese nation, Xi said.

The "Two Centenary Goals" are to complete building a moderately prosperous society in all respects by the CPC's centenary in 2021, and to turn China into a modern socialist country that is prosperous, strong, democratic, culturally advanced, and harmonious by the time of the centenary of the New China in 2049.

Xi extended warm National Day congratulations to the Chinese people of all ethnic groups and all compatriots at home and abroad, and he expressed heartfelt gratitude to friends around the world for their caring and support for China's development.

Xi also reviewed the grand military parade and mass pageant on Tuesday in celebration of the 70th anniversary of the PRC.