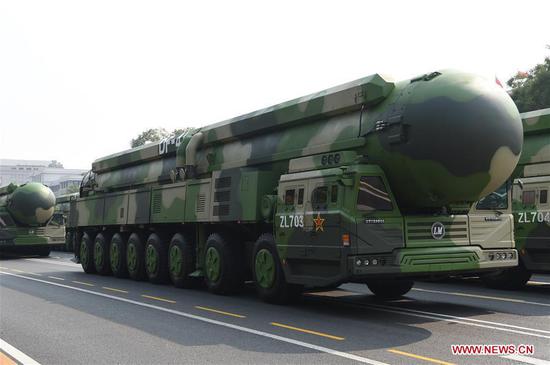 The formation of Dongfeng-41 nuclear missiles takes part in a military parade celebrating the 70th anniversary of the founding of the People's Republic of China (PRC) in Beijing, capital of China, Oct. 1, 2019. (Xinhua/Xia Yifang)

China staged a stunning military parade in central Beijing on Tuesday, showcasing the remarkable strides made by the Chinese armed forces in recent years.

The parade reflected the military's new structure, created through reforms starting in late 2015. The reforms were initiated by President Xi Jinping and represent the most thorough overhaul of the nation's defense systems in the past several decades.

About 15,000 officers and soldiers from the People's Liberation Army, People's Armed Police Force, reserve services and militia, including more than 100 senior officers with a rank of major general or higher, took part in the 80-minute parade in front of Tian'anmen Square, one of prominent symbols of New China.

It was the country's 18th military parade since the People's Republic of China was founded in 1949 and its 15th National Day parade.

Riding in a limousine before the procession commenced, President Xi, who is also general secretary of the Communist Party of China Central Committee and chairman of the Central Military Commission, inspected troops and weapons waiting along the eastern section of Chang'an Avenue.

Fifteen marching units of troops moved down the avenue on foot. Most of those were led by two major generals or rear admirals. One of the formations was composed of dozens of high-ranking officers, including commanders from the Central Military Commission and the PLA's five theater commands.

It was the first National Day parade for the PLA Strategic Support Force and the PLA Joint Logistic Support Force, which were established in recent years. It was also the first time China's peacekeeping troops have participated in a parade.

A total of 580 pieces of weaponry and equipment in 32 units followed the marching groups, putting on public display the nation's prowess in land and sea combat, air and missile defense, informational operations, unmanned tasks, logistical support and strategic strikes.

In the skies, about 160 fighter jets, bombers, early-warning and control planes, electronic reconnaissance planes, attack helicopters and other types of military aircraft in 12 units roared over urban Beijing, representing the country's air power.

All of the military hardware appearing in the parade was developed and built in China. Many of them had not been shown in public before.

The groupings of troops and weapons were based on their roles and missions in joint operations on different battlefields, which were designed to raise participants' awareness of joint warfare, according to Major General Cai Zhijun, a senior official in the Central Military Commission's Joint Staff Department and deputy director of the Office of the Parade Leading Group.