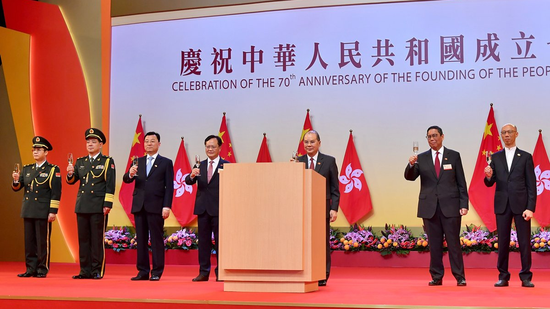 The Hong Kong Special Administrative Region (HKSAR) on Tuesday saw various forms of activities, both official and grassroots, marking the 70th anniversary of the founding of the People's Republic of China, despite rioters' threats to mar the festive occasion with sabotage.

A range of patriotic activities were held across the city and attended by thousands of residents, with taxis putting up national flags and hikers chanting patriotic slogans.

On Tuesday morning, more than 2,000 taxis hoisted national flags and made a parade across the HKSAR.

The organizer Taxi Drivers and Operators Association said the parade represented its 60,000 cabbies' love for the country and the city, and their support for actions by the HKSAR government and police to stop violence and restore peace.

A national flag protection campaign was also launched in Edinburgh Place and Central by Safeguard Hong Kong, a community group formed by different sectors of the society, to protect the national flag from desecration by rioters.

Meanwhile, more than 1,000 local hikers mounted one of Hong Kong's popular trails while chanting "China add oil!" and "Hong Kong add oil!" all the way, with another group unfurling a huge national flag on top of Tai Mo Shan, the city's highest peak.

When two boats sailed into the middle of Victoria Harbor at around 9:00 a.m. local time, more than 300 people on board stood up and sang the national anthem.

Ellen Tsang, coordinator of this activity, hoped that the activity could inject positive energy into the community and encourage Hong Kong youths to contribute to the country.

A flag-raising ceremony was held at the Golden Bauhinia Square Tuesday morning to mark the National Day, followed by a grand reception hosted by the government of the Hong Kong Special Administrative Region (HKSAR).

A total of 2,000 guests from different walks of life attended the reception and watched the flag-raising on live TV.

The Police Band performed at the ceremony, followed by a disciplined services sea parade and fly-past.

On the same day in Beijing, HKSAR Chief Executive Carrie Lam led a delegation of more than 240 people to participate in China's National Day celebrations.

An HKSAR float themed "Hong Kong In", was seen at the mass parade, designed to showcase the city's dynamism and connectivity as a gateway linking the country with the rest of the world.

HKSAR Chief Secretary Matthew Cheung Kin-chung, who is taking the role of acting Chief Executive while Carrie Lam is out of town, gave a speech during the flag-raising ceremony.

Hailing Hong Kong's strong development and progress backed by its motherland, Cheung reiterated Hong Kong's firm support of the "One Country, Two Systems" and expressed confidence in the city's future.

"During the glorious course of national development, Hong Kong has leveraged its strengths to serve our country's needs and benefited from its rapid development. The continuous improvement of the living standards of people on the Mainland and in our city demonstrates how Hong Kong has developed jointly and shared prosperity with our country," he said.

Cheung expressed his confidence for Hong Kong to start afresh and seize new opportunities by fully leveraging its unique advantage.

"Today, Hong Kong possesses both our solid foundation and the full support of our country. What Hong Kong should do is to uphold the 'One Country' principle while fully leveraging the advantages of 'Two Systems'," he urged.

Most Hong Kong people are "shocked and saddened" by the violent protests that have disrupted social order and hit the city's economy, Cheung stressed, vowing to truly reach out to the public through open dialogues to find practical solutions.

It is only through ensuring the robustness of 'One Country, Two Systems', upholding the Basic Law, defending fiercely the rule of law and national sovereignty that Hong Kong can break the current deadlock and continue to thrive in the years ahead, he said.