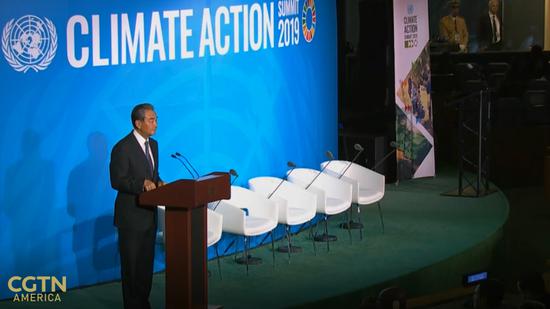 "To jointly tackle this challenge and to protect the planet we all call home, will be a journey critical to the future and destiny of mankind," Wang said.

He asked delegates to see to it that the climate summit and the COP 25 produces positive outcomes.

He also indicated that U.S. President Donald Trump's withdrawal of the United States from the Paris Agreement should not deter other countries.

"The withdrawal of certain parties will not shake the collective will of the international community, nor will it possibly reverse the historical trend of international cooperation," Wang said, followed by applause from the audience.

And since 2000, China has contributed to a quarter of the world's newly forested land.

"Low and difficult as the journey of tackling climate change may be, sustained actions will take us to the destination," Wang said. "By working together we will build a clean and beautiful world."