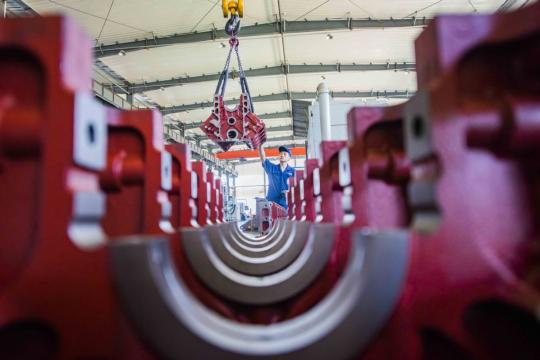 An employee works on the production line of a generator manufacturing company in Weifang, Shandong province. (Photo by Wang Jilin/For China Daily)

Manufacturing continued to be the bright spot of China's industrial landscape during the first six months of this year, with the sector logging revenues of more than 8 trillion yuan ($1.13 trillion) during the period, way ahead of other sectors like financial services, industry experts said.

The growth momentum is set to continue for the rest of the year also, with the high-end manufacturing segment poised for further gains, they said. Advanced manufacturing enterprises are already playing an important role in China's structural upgrade, supply-side reform and high-quality economic growth.

Stressing the importance of the manufacturing sector, President Xi Jinping said greater global cooperation and mutual learning is necessary to jointly seize the opportunities arising from China's new round of scientific and industrial advances.

Xi made the remarks in his congratulatory letter to the 2019 World Manufacturing Convention that opened in Hefei, Anhui province, on Friday.

Shenzhen-listed Suzhou Shijia Science and Technology Co, which provides support services for global elevator enterprises, semiconductor devices, communication devices and other fields, saw its net profit in the first half soar 350.88 percent year-on-year. Its share price has nearly doubled from the start of the year and closed at 42.08 yuan per share on Monday.

In the first six months, Shenzhen-listed Baoding Technology Co Ltd, a large-scale forging and casting manufacturer, saw its net profit surge by 124.71 percent year-on-year. On Monday, its share price surged to the daily limit and closed at 12.67 yuan per share.

"Some subdivisions of the manufacturing sector, such as nonferrous metals, steel, and building materials, have continued to upgrade their industrial chains and seen outstanding growth. For example, in the first six months, the construction business netted overall sales growth of 16.8 percent year-on-year, which is 5.3 percentage points higher than the previous year," said Fang Yanhe, a researcher at Huatai Securities.