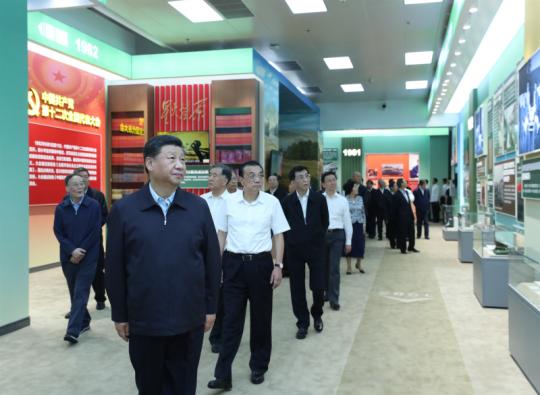 President Xi Jinping, also general secretary of the Communist Party of China Central Committee and chairman of the Central Military Commission, and other Party and government leaders, visit an exhibition on the achievements China has made since the founding of the People's Republic of China in 1949, at the Beijing Exhibition Center on Monday. (Photo/Xinhua)

Xi, also general secretary of the Communist Party of China Central Committee and chairman of the Central Military Commission, made the remark on Monday while attending the opening of an exhibition in Beijing.

Sprawling over 155,000 square meters in downtown Beijing, the exhibition showcases China's achievements over the past 70 years in chronological order.

Since the founding of the People's Republic of China seven decades ago, the CPC has remained true to its original aspiration and kept its mission firmly in mind, it has united and led the nation to overcome numerous difficulties and produced a great number of miracles, Xi said.

The Chinese nation has achieved a tremendous transformation: It has stood up, grown rich and become stronger over the past decades, he said.

Xi said that the country's success in the past 70 years has fully proved that only the CPC can lead China, only socialism can save China, only reform and opening-up can promote China's development and only socialism with Chinese characteristics can lead to China's prosperity.

Xi stressed the importance of holding such an exhibition of the country's achievements as it encourages the whole Party, the whole nation and its people to rally closely around the CPC Central Committee, hold high the banner of socialism with Chinese characteristics and make continuous efforts for the Chinese dream of national rejuvenation.

The exhibition comprises five chapters showing how Chinese people, under the leadership of the CPC, established and developed socialism and worked to build a modern socialist country.

It highlights the importance of following the Party's leadership in the process of making great achievements in the past decades, according to information released at a news conference late last month.

The exhibition also demonstrates the people-centered philosophy of the CPC's governance, providing daily necessities, such as clothing and shelter, as displayed by objects and videos.