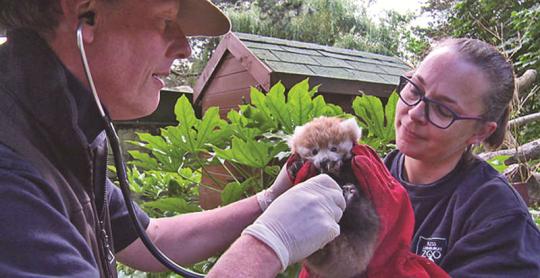 Edinburgh Zoo in Scotland has confirmed that its red panda breeding pair, Bruce and Ginger, have produced a male offspring, providing a valuable addition to international efforts to conserve the threatened Asian species.

The baby red panda was born in July, but the zoo kept his existence under wraps while he matured in the family's den. His birth was made public after the zoo performed medical tests and gave the new addition a clean bill of health.

"Bruce and Ginger had a boy!" the zoo said on social media. "Meet Ruaridh, our extremely adorable red panda kit."

The name Ruaridh means "red-haired king" in Scottish Gaelic, which is one of the Celtic languages native to Britain and Ireland.

The name was chosen by the team at the People's Postcode Lottery, a subscription lottery that raises money for charities. The organization funded the construction of the red panda enclosure at Edinburgh Zoo in April 2017.

Ruaridh's parents, Bruce and Ginger, were born at zoos in the Netherlands four years ago and were brought to Edinburgh in 2016 and 2017, respectively. The pair lived separately for a time as they settled into life in Scotland, and zoo keepers said the two hit it off immediately when they were introduced to one another following the completion of their enclosure.

Alison MacLean, head carnivore keeper at Edinburgh Zoo, said Bruce and Ginger have played a "vital role" in the conservation of the threatened species.

While its name would suggest otherwise, the red panda is more closely related to skunks, raccoons, and weasels than it is to the giant panda. The animal, which primarily feeds off bamboo leaves, is characterized by its thick coat of ginger fur and its bushy, striped tail.

There are an estimated 10,000 wild red pandas living in dense forests in Nepal, India, Burma, and China.

The International Union for Conservation of Nature, or IUCN, placed the red panda on its endangered list in 2015 because the global population had declined by 50 percent during the previous two decades, mainly due to habitat loss, hunting, and poaching.

The red panda is classed as a category II species under China's Wild Animal Protection Law, which protects it from hunting and trade.

In China, the red panda shares some of its habitat with the giant panda, and the two species have benefitted from the creation of more than 33,000 square kilometers of new reserves since 1990.

The Chinese Academy of Sciences has collaborated with several international conservation bodies, including the IUCN and the Small Carnivore Specialist Group, on conservation strategies for the red panda.