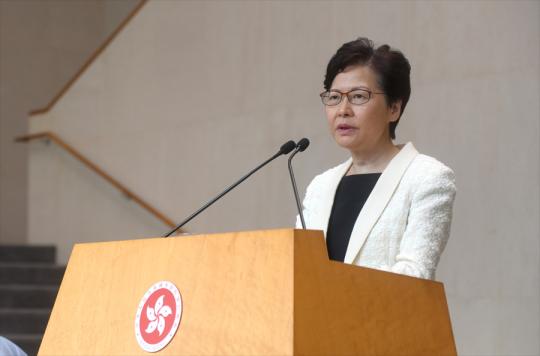 Hong Kong is expected to get a new start amid the city's protracted turmoil as the first open dialogue between the city's leader and its people is scheduled for Thursday.

The session, set for 7 to 9 pm at the Queen Elizabeth Stadium in Wan Chai district, will see Carrie Lam Cheng Yuet-ngor, chief executive of the special administrative region, and some principal officials engage in face-to-face talks with 150 registered residents.

The statement issued by the regional government on Thursday afternoon did not say which principal officials will accompany Lam.

According to the statement, interested participants may submit their registration forms online or at Home Affairs Enquiry Centers through Monday. Places at the dialogue will be allocated by a random computer drawing if the number of registrants exceeds the quota.

Participants will not be allowed to bring any materials that might disrupt the event, including megaphones, sound amplifiers, umbrellas, defensive equipment such as mask respirators or helmets, flags, banners, bunting, plastic, glass, metal bottles or containers, or bottled or canned drinks.

Direct dialogue with residents is one of the four initiatives Lam proposed to mend social rifts during the continued anti-government protests, which have adversely affected the city's economy and people's livelihoods.

Before announcing the arrangement, the city's leader met with about 100 district councilors on Wednesday night. It was part of the government's effort to help the city move forward after more than three months of chaos and violence.

Lam, in her closing remarks before the meeting ended, said breaking the deadlock requires strict and impartial law enforcement as well as an open dialogue. The government intends to hear about the deep-seated issues in politics, economy and people's livelihoods that triggered and fueled the protracted chaos, Lam said.

Lam stressed that "one country, two systems" remains the cardinal principle in maintaining Hong Kong's prosperity and stability, and the rule of law is still one of the core values of the city. The government will always uphold the principle and the core value in handling social problems, she pledged.

The councilors called the two-hour meeting "a good start" to breaking the impasse.

After the meeting, Kwun Tong district Councilor Frankie Ngan Man-yu expressed the hope that the government would make such meetings routine.

He said the meeting laid a solid groundwork for the government's dialogue with the public.

Kowloon district Councilor Priscilla Leung Mei-fun advised the government to adopt a more proactive manner to end violence, such as introducing anti-mask legislation and establishing a designated court to handle riot cases. Leung made the comments in a speech at the meeting.