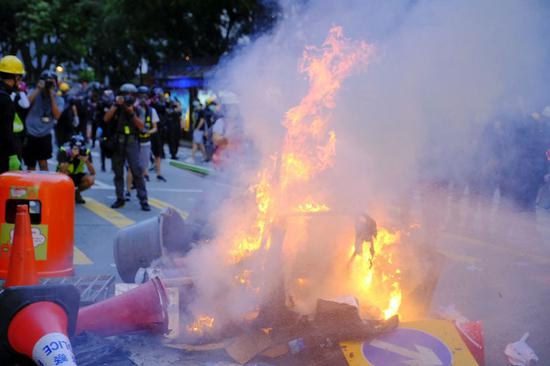 "The police severely condemn such violent acts. Radical protesters escalated their violent acts and have no regard to the laws of Hong Kong," the police said in a press release issued on Monday morning, vowing to continue to take resolute enforcement actions to safeguard the city's public safety and bring all lawbreakers to justice.

Protesters set fire to Wan Chai MTR station as public facilities have again become their target. Firefighters are at the scene to extinguish the fire.

The police on Twitter said demonstrators have resorted to violent acts as they marched from Causeway Bay area to Central area. They obstructed traffic, set multiple fires, and damaged metro stations. They also vandalized the Central Government Complex, digging up bricks from the pavement and hurling petrol bombs and hard objects.

"The officers are now conducting a dispersal operation with the use of tear gas," Hong Kong police said on Twitter, asking members of the public to avoid the area.