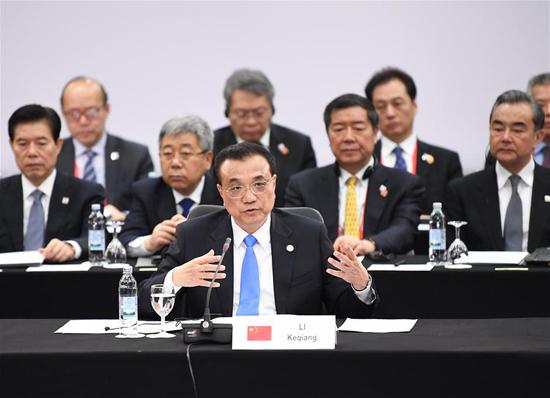 Li made the appeal when attending, together with 16 CEEC leaders, an opening ceremony of the 9th Business Forum of CEEC and China.

Li said China-CEEC cooperation has maintained exuberant vigor and vitality, which is supported by the constant development of economic and trade cooperation.

Amid the backdrop of a slowdown in the world economy last year, trade volume between China and the 16 countries increased 21 percent, hitting a record high in history, and displaying a broad prospect for cooperation, Li said.

The premier said that China is willing to better align the Belt and Road Initiative with the development strategies of other countries, uphold the principles of extensive consultation, joint contribution and shared benefits, and insist on promoting peace, cooperation, openness, inclusiveness and mutual learning, so as to push for a broader and deeper China-CEEC economic and trade cooperation.

To improve trade facilitation, the Chinese premier called for further opening up their respective markets and simplifying customs procedures.

On investment and industrial capacity cooperation, Li said the Chinese government supports enterprises in their commercialized operations, and hopes that relevant countries will uphold the principles of fairness, justice and non-discrimination and protect Chinese companies' legitimate rights.

To further enhance small and medium-sized enterprises (SMEs) cooperation, this year's leaders' meeting is going to launch the Global Partnership Center of CEECs and China and a website on the China-CEEC SMEs coordination mechanism in a bid to provide more convenient services for businesses to expand investment cooperation.

On boosting connectivity, Li said China encourages its enterprises to participate in infrastructure construction in the CEECs.

The premier briefed the forum on China's economic situation, saying that the Chinese economy has been generally stable, and the country is confident in achieving this year's main development targets, including a 6-6.5 percent of GDP (gross domestic product) growth.

Croatian Prime Minister Andrej Plenkovic noted that the theme of the forum is "Building New Bridges through Openness, Innovation and Partnership," saying that he hoped all parties concerned can take this opportunity to further deepen economic and trade cooperation.

He also hailed last year's China International Import Expo in Shanghai, saying that the fair has presented new opportunities for all countries.

In the past few years, exports from the CEECs to China have increased by nearly five fold and China-CEEC cooperation has grown much closer, which is conducive to narrowing their gaps with developed countries, he said.

The Peljesac Bridge project is a model of EU-China cooperation, which will further enhance connectivity and EU-China trade, said the Croatian prime minister.

Li and Plenkovic jointly launched the China-CEEC SMEs coordination mechanism website. Together with other CEEC leaders, they also visited an exhibition on China-CEEC education cooperation, and attended a matchmaking meeting for SMEs from China and the CEECs.

More than 1,000 delegates from the governments, as well as business and industrial communities of China and the CEECs attended the opening ceremony.