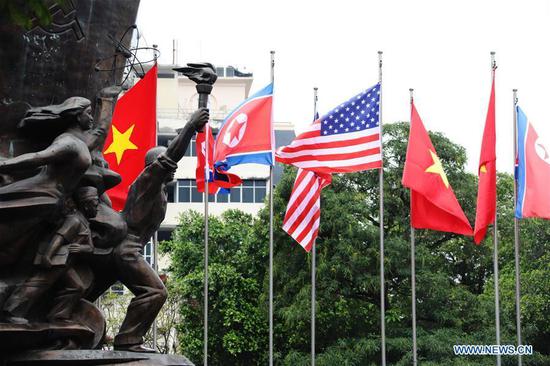 Photo taken on Feb. 25, 2019 shows national flags of Vietnam, the DPRK and the United States in Hanoi, Vietnam. The second summit between top leader of the Democratic People's Republic of Korea (DPRK) Kim Jong Un and U.S. President Donald Trump will be held in Hanoi on Feb. 27-28. (Xinhua/Wu Xiaochu)

"To find where both sides can come across as being a winner."

"That's a very hard thing to do at any sort of negotiation."

Similar remarks above are the common concerns among experts and scholars when talking about the February 27-28 summit between U.S. President Donald Trump and Kim Jong Un, top leader of the Democratic People's Republic of Korea (DPRK), in Hanoi, the Vietnamese capital.

Considering the deadlock between the U.S. and the DPRK after their first Singapore summit in June last year, "imagination is needed" to reach a compromise as former congressman Lee Kwang-Jae from the Republic of Korea said in an interview.

Here are four scenarios that could produce a somewhat satisfactory outcome for the two leaders at the summit.

CVID (complete, verifiable, and irreversible denuclearization) as demanded by Washington?

1. The DPRK could hand over a report, giving full lists of its nuclear and missile assets.

2. The DPRK could agree to give up some of its nuclear arsenal, such as shipping some of its intercontinental ballistic missiles (ICBMs) out of the country and freezing plutonium and uranium production, which will reduce DPRK's capability to target U.S. territory.

3. The DPRK could promise to "permanently dismantle" its Yongbyon main nuclear complex and allow international inspectors into some missile sites.

4. The DPRK could allow the declared nuclear sites to be inspected bya "special" verification organization, which is based on cooperation between the United States, the Comprehensive Nuclear-Test-Ban Treaty Organization, or some third-party countries.

(Challenges: All these steps require corresponding measures from the U.S., and threatening signals have not disappeared, such as "an alternative way" Kim mentioned in his New Year speech.)

1. The U.S. could promise no new sanctions or delay certain sanctions if the DPRK takes steps towards denuclearization.

2. The U.S. could agree to lift some sanctions, such as easing the ban on Americans traveling to the DPRK and relaxing restrictions on humanitarian aid, which could be lifted through an easy procedure.

3. The U.S. could promise to be quiet when the United Nations, China, Russia or the Republic of Korea offer economic opportunities for the DPRK, including restarting inter-Korean projects (maybe the Kaesong industrial complex, the Mount Kumgang tourism project and inter-Korean road and railway cooperation), etc.

4. The U.S. could propose to establish an international escrow account to promote infrastructure construction in the DPRK.

(Challenges: Complexity involved with reducing or eliminating sanctions, given the difference between sanctions imposed by the UN and those by the U.S.; doubts exist whether promises can be kept, given Trump's unpredictable style.)

1. The U.S. could make a formal peace declaration (maybe a peace statement, a non-aggression agreement) or begin the process to issue a peace treaty to formally end the 1950-1953 Korean War.

2. Relevant parties -- namely the DPRK, the ROK, China and the U.S. -- could formulate a political statement that officially declares the end of the Korean War, paving the way for the subsequent signing of a peace treaty.

3. The U.S. could set up a liaison office in the DPRK and the DPRK could send its own envoys to the U.S., which would serve as the first major step towards establishing diplomatic relations between the two nations.

(Challenges: Lack of support in the U.S. Congress for a legally binding peace treaty; the peace treaty would probably trigger a huge change in politics on the Korean Peninsula and corresponding diplomatic relations.)

1. The U.S. and the ROK could decide to permanently end their joint military exercises.

2. Washington could agree to reduce U.S. military presence in the ROK.

(Challenge: The U.S.-ROK military alliance could be weakened.)

Since the challenges of each proposal cannot be solved easily, the possibility of a breach still exists.

1. Two leaders would meet and one of them might end up angering the other (or they both might get pissed off) and they could walk away from the negotiations altogether. The trend of improving U.S.-DPRK ties could be reversed and tensions could return.

2. The summit could end without any concrete agreement, but both sides may agree to continue talks.

Nevertheless, few had predicted that Trump and Kim could talk face-to-face twice in eight months. Perhaps more solutions could be proposed by the two politicians. Will things change for the better or the worse, and will the impasse be broken? Let's wait and see.