Tibet works to guard its jewels of nature 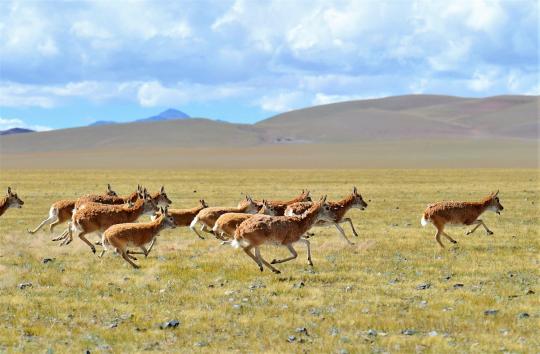 The Tibet autonomous region has been making great efforts to protect its natural environment and has vowed to maintain the region as one of Earth's purest landscapes.

Xi's words were widely accepted by local governments and residents in Tibet, and the region has put environmental conservation ahead of tourism development. In fact, it will reduce the number of tourists visiting certain scenic spots close to glaciers this year, such as Mount Qomolangma (known as Everest in the West). 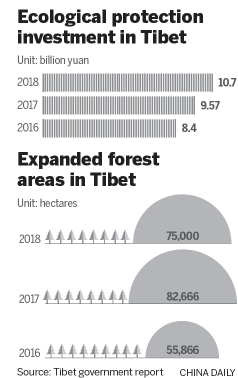 At the annual sessions of the region's people's congress and political advisory body in January, authorities called for more pollution control through greater input and efforts this year.

"Tibet remains one of the best ecological environments in the world," said Qi Zhala, chairman of the regional government, during the congress earlier this year. "In 2019, our goal is to achieve the targets for energy consumption, carbon intensity and pollution reduction set by the State, with major cities seeing fairly good air quality on more than 95 percent of days."

All levels of government are responsible for the environment, and the Tibet regional government has been encouraging rural residents to undertake the task, with 667,000 jobs related to the environment offered in 2018.

The annual ecological subsidy paid to residents who return their land to nature and agree to conduct ecology patrols was raised to 3,500 yuan ($518) last year.

The region also finished its work to protect the sources of drinking water for urban areas, according to the region's annual government work report.

Tsonyi contains the world's third-largest glacier, Purog Kangri, and is the region's least-populous county. This makes it a haven for many rare species, such as the Tibetan antelope, wild yak, Tibetan brown bear, mountain sheep, Tibetan wild ass, Mongolian gazelle and black-necked crane.

"We forbid mining and any other businesses that are unfavorable to nature, and we've banned tourists from visiting the Purog Kangri glacier and other sacred mountains and lakes since last year," Zhang said.

"We would rather slow down, or even give up, our economic development rather than harm nature. This is important to ensure that future generations can also see the clear waters and lush mountains."

The county has established 15 natural reserves, and more than 130 people have been employed to patrol them.

Thanks to the government's efforts to protect the environment and the animals that call it home, wildlife numbers have risen steadily in recent decades.

Janyor, one of those who patrol the area - mainly at night - said he has been hearing about more incidents involving animals such as wolves and bears in recent years. The patrols take place at night to make sure residents and their animals are safe.

Despite Tibet being known as a mountaineering destination for climbers all over the world, the region has taken new steps to reduce the number of climbers because of environmental concerns.

Nyima Tsering, who also serves as the captain of the China Mountaineering Team (Tibet), said Qomolangma, the world's tallest mountain, draws global attention, so it's crucial to protect it and avoid pollution. The number of climbers on Mount Qomolangma will be kept under 300 per year.

According to bureau officials, the autonomous region carried out three large-scale garbage collection projects last year, gathering 8.4 metric tons of various mountaineering-related trash that had been left on the mountain.

Luojie, who is in charge of the region's ecology and environment, said Tibet will focus on fighting pollution to turn it into a more beautiful place.