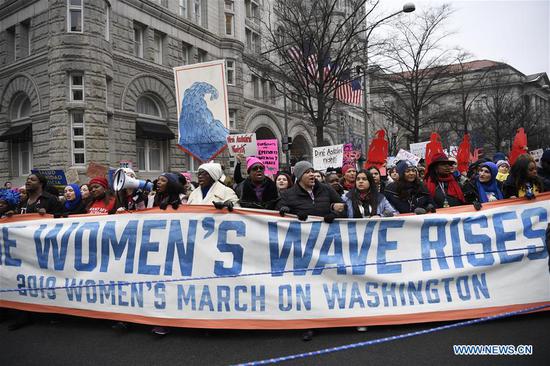 Protesters gather near the freedom plaza in Washington D.C., the United States, Jan. 19, 2019. Thousands of women gathered in Washington D.C. on Saturday for the third Women's March, supporting women's rights while denouncing racism and violence against women. (Xinhua/Liu Jie)

Thousands of people, most of women, gathered in Washington D.C. on Saturday for the third Women's March, supporting women's rights while denouncing racism and violence against women.

In a cold, windy weather, demonstrators from across the country, of different ages, converged on the capital's Freedom Plaza, as they prepared to march past nearby blocks.

Banners they were holding also carried messages promoting racial and social equality, peace, environmental protection and other topics, along with slogans expressing dissatisfaction towards policies and actions of the current administration.

Hanna Plager, from the state of Massachusetts, told Xinhua that she's coming to D.C. to "stand up for women's rights."

Elliott West, who's from state of Arkansas with his wife here showing solidarity, said he's not satisfied with what's going on in Washington, urging politicians to do their jobs.

The Women's March organizers said almost 300 "sister marches" would take place around the United States, with dozens scheduled around the rest of the world.

But this year's event has been shadowed by accusations of anti-Semitism against some of the original organizers, potentially contributing to a lower turnout than the past two years.

While the Women's March in 2017, the first of its kind, drew 3.3 million to 5.2 million nationwide, and hundreds of thousands rallied in 2018, D.C. police said they expected perhaps 20,000 demonstrators this year.

The march also came amid a record-breaking partially government shutdown, entering into its 29th day on Saturday.