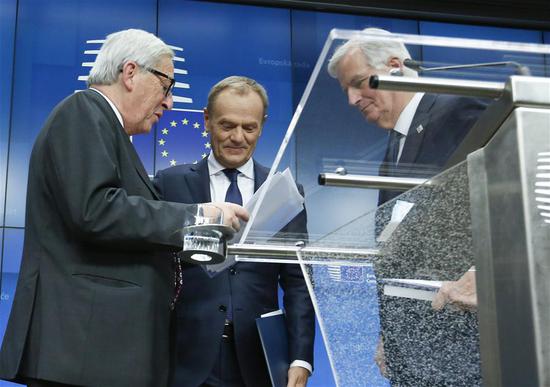 European Commission President Jean-Claude Juncker, President of the European Council Donald Tusk and the European Union's (EU) chief negotiator Michel Barnier (from L to R) talk after a press conference at the end of a special Brexit summit in Brussels, Belgium, Nov. 25, 2018. (Photo/Xinhua)

All 27 EU country leaders approved the legally-binding Brexit withdrawal deal at a special EU summit in Brussels on Sunday after over 18 months of negotiations, announced European Council President Donald Tusk.

The 27 leaders took barely half an hour to rubber-stamp a 600-page treaty which sets the terms for Britain's withdrawal from the European Union on March 29 and a 26-page declaration outlining a future free trading relationship.

The EU leaders describe the package as the best that Britain will get, while urging Britons to back May.

“Those who think that, by rejecting the deal, they would get a better deal, will be disappointed,” European Commission President Jean-Claude Juncker told reporters after the pass of the package.

However, Juncker added that the leaving of the UK "is a sad moment and it's a tragedy."

European Council President Donald Tusk said the bloc was determined to have as close as possible a partnership with Britain, which has long been skeptical about EU integration: “We will remain friends until the end of days. And one day longer,” he said.

British Prime Minister Theresa May, the lady at the center, agrees that the package is the best deal possible, adding that it is also the only one on the table.

May told a news conference after the summit that she would now try to convince lawmakers to back the deal by publishing analysis and by talking to the public, underlining that if it was rejected, Britain would face more uncertainty.

“In any negotiation, you do not get everything you want,” May said. “I think the British people understand that.”

Britain's main opposition Labour Party will oppose the government's Brexit deal in parliament, its leader Jeremy Corbyn said on Sunday, describing the agreement approved in Brussels as “a miserable failure of negotiation”.

“This is a bad deal for the country. It is the result of a miserable failure of negotiation that leaves us with the worst of all worlds. It gives us less say over our future, and puts jobs and living standards at risk,” Corbyn said in a statement.

“That is why Labour will oppose this deal in parliament. We will work with others to block a no deal outcome, and ensure that Labour's alternative plan for a sensible deal to bring the country together is on the table.”

With the signing off, May will then need to persuade MPs in the UK Parliament to back it. MPs are expected to vote in December.

The agreement will also have to go back to the European Council, where a majority of countries will need to vote for it.

It will also need to be ratified by the European Parliament, in a vote expected to take place in early 2019.

If nothing is decided before March 29, 2019 – beyond acceptance of a deal by other EU members – the country will drop out of the EU without any deal in place.

(With inputs from Reuters) 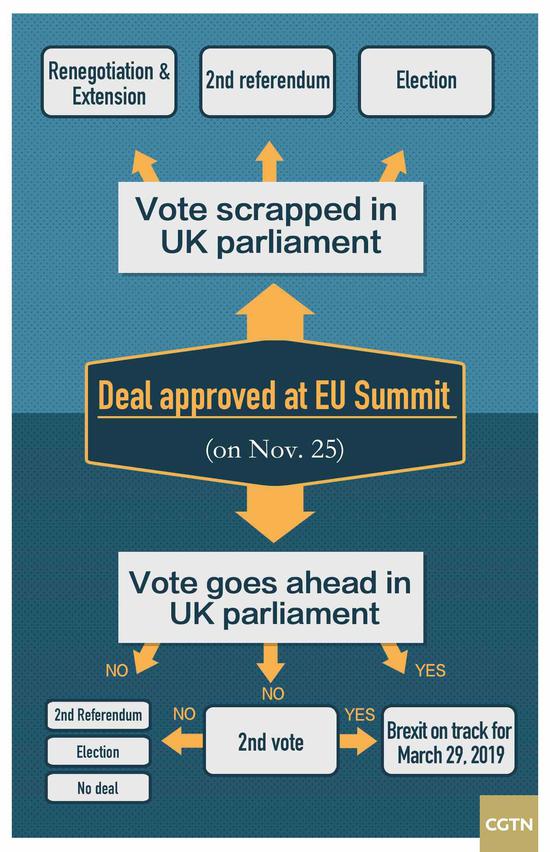