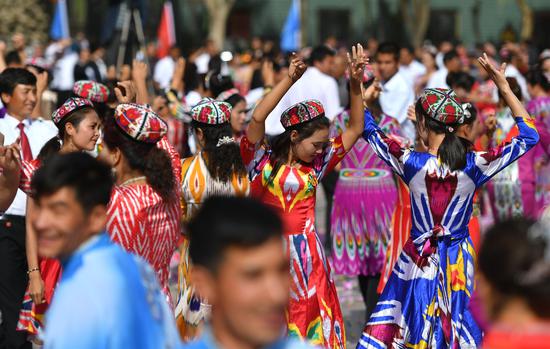 The State Council Information Office on Thursday issued a white paper on cultural protection and development in Xinjiang.

The white paper said China is a unified multi-ethnic country. In the course of a civilization that dates back more than 5,000 years, the various ethnic groups of China have created a long history and a splendid culture.

Since ancient times many ethnic groups have made their way to Xinjiang, and it has become their home and a place for cultural integration. Various ethnic cultures of Xinjiang have their roots in the fertile soil of Chinese civilization, advancing their own cultural development while enriching the overall culture of China, it said.

Since the People's Republic of China was founded in 1949, the Chinese government has attached great importance to documenting and protecting the excellent traditional ethnic cultures in Xinjiang, and ensuring that they are passed on to succeeding generations, the white paper said.

The Chinese government has promoted creative transformation and innovative development, encouraging these ethnic groups to learn spoken and written languages from each other, promoted communication and integration, respected their freedom of religious belief, and worked to develop their cultural undertakings and industries, it added.

The government has worked to modernize ethnic cultures, to strengthen cultural exchanges with foreign countries, and to enhance each group's cultural confidence while engaging in exchanges with and mutual learning from others, according to the white paper.