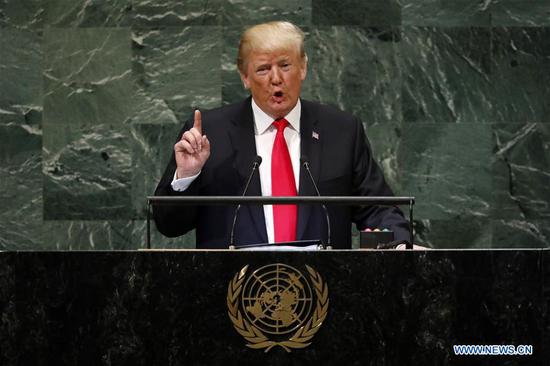 U.S. President Donald Trump made himself a target for criticism by attacking globalism and touting his America First foreign policy and trade stance in a speech to the United Nations General Assembly on Tuesday.

"We reject the ideology of globalism, and we embrace the doctrine of patriotism," Trump said, highlighting achievements that he said have made the United States a "stronger, safer and a richer country" than before.

Trump said the U.S. is taking a "hard look" at its foreign assistance to countries that don't have American interests "at heart".

He attacked organizations such as the UN Human Rights Council and International Criminal Court, saying the U.S. "will never surrender America's sovereignty to an unelected, unaccountable, global bureaucracy".

But when Trump said, "In less than two years, my administration accomplished more than almost any administration in the history of our country," the audience broke out in laughter. Trump smiled and responded, "I did not expect that reaction, but that's OK."

UN Secretary-General Antonio Guterres warned in a speech of the dangers of nations turning inward. "Multilateralism is under fire precisely when we need it most," he said.

Foreign Ministry spokesman Geng Shuang said at a regular press briefing on Wednesday that China hopes the U.S. will take heed of the UN secretary-general, the president of the General Assembly and the voice of other countries.

"We hope the U.S., as the No 1 superpower, will think about its due role in pushing for the resolution of global and regional hot spot issues, addressing global threats and challenges and promoting global peace and development," he said.

In response to Trump's criticism of socialism, Geng said that every country has the right to choose its own development path and social system.

Fan Jishe, a researcher at the Institute of American Studies of the Chinese Academy of Social Sciences, said the speech is a reflection of Trump's style and his policies.

Trump lashed out at Iran and the nuclear deal, asking "all nations to isolate Iran's regime as long as its aggression continues".