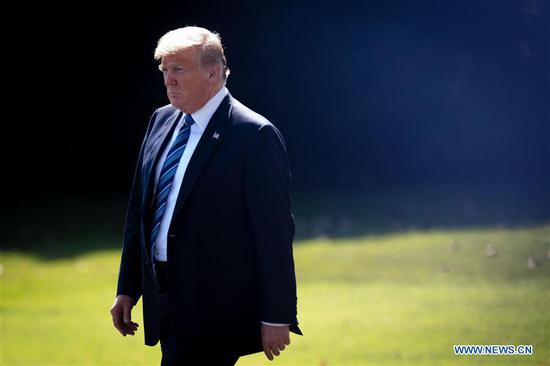 U.S. President Donald Trump has signed an executive order on Wednesday to punish any foreign interference in U.S. elections, a latest attempt by the administration to show its resolution to fight against elections meddling, said U.S. officials.

The order will direct the intelligence community to assess if any foreign individual, entity or country has interfered in a U.S. election, Director of National Intelligence Dan Coats told reporters at a conference call held at Wednesday noon.

After an up-to-45-day assessing period, the gathered information will be passed to the Justice Department and the Department of Homeland Security, who also have 45 days to decide if they should go forward with the sanctions, explained National Security Advisor John Bolton who jointed the call.

The sanctions will be automatically triggered if any foreign interference has been found, said Coats, adding that the U.S. State and Treasury departments, sharing the intelligence information, could impose additional sanctions "if the automatic sanctions we deem is not enough."

Bolton, describing the order as a mandate that "goes to any action that's taken with the intent of interfering in the election," also said it was not "country-specific."

The order came weeks ahead of the U.S. midterm elections which will be held in November.

Robert Mueller, a special counsel, has been looking into alleged Russian meddling in the 2016 U.S. presidential election and any potential collusion between the Trump campaign and Moscow, a claim that has been denied both by Moscow and Trump himself.

Trump has repeatedly denounced Muller's investigating as a "witch hunt." Meanwhile, the Trump administration has been attacked by U.S. lawmakers for not being tough enough against Russia after the U.S. intelligence community concluded that Moscow has influenced the 2016 elections.

U.S. Senator Marco Rubio and Chris Van Hollen said in a joint statement on Wednesday that the newly-signed order "recognizes the threat, but does not go far enough to address it."

"The United States can and must do more," they said.