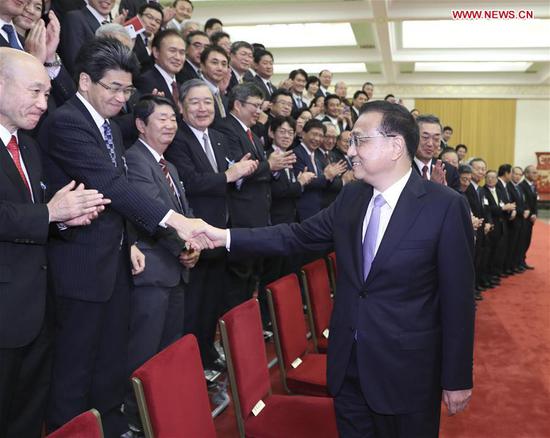 Chinese Premier Li Keqiang meets with a delegation of Japan's business community, led by Chairman of Japan Business Federation Hiroaki Nakanishi, President of the Japan-China Association on Economy and Trade Shoji Muneoka, and Chair of the Japan Chamber of Commerce and Industry Akio Mimura, at the Great Hall of the People in Beijing, capital of China, Sept. 12, 2018. (Xinhua/Ding Lin)

Chinese Premier Li Keqiang Wednesday expressed the expectation that China and Japan should consolidate the current momentum of improvement in ties and promote the relationship to move steadily forward on the basis of the development of the ties returning to the right track.

Li voiced the hope in a meeting with a delegation of Japan's business community, led by Chairman of Japan Business Federation Hiroaki Nakanishi, President of the Japan-China Association on Economy and Trade Shoji Muneoka, abd Chair of the Japan Chamber of Commerce and Industry Akio Mimura.

"Thanks to the joint efforts of both sides, the current momentum of improvement in Sino-Japanese relations has continued to increase," said Li.

Noting this year marks the 40th anniversary of the signing of the China-Japan Treaty of Peace and Friendship, Li said, the two sides should abide by the principles established by the four political documents signed between the two countries, proceed from the fundamental and long-term interests of the two peoples, and firmly grasp the correct direction of peace, friendship and cooperation, in the spirit of taking history as a mirror and looking into the future.

China and Japan can use the role of economic and trade cooperation as a "propeller" in bilateral ties, said Li, calling on the two sides to strengthen cooperation in innovation and high technology, and explore cooperation in a third market.

Li expected the two sides to achieve mutual benefits and win-win results at a higher level and in wider fields by continuously releasing the potential of cooperation.

"China will unswervingly promote reform and opening up, further relax market access, strictly protect intellectual property rights, and further optimize the business environment, so as to make China continue to be a hot destination for foreign investment," said Li.

As China and Japan are two of the world's major economies, they have the responsibility to jointly oppose unilateralism and protectionism and maintain multilateralism and free trade, said the Chinese premier.

Li said that China is willing to work with all parties including Japan to actively promote the negotiation process of a China-Japan-Republic of Korea (ROK) free trade agreement and the Regional Comprehensive Economic Partnership (RCEP) and to forge ahead trade and investment liberalization and facilitation and promote the construction of an open world economy by concrete moves.

The leaders of the visiting delegation said that the development of friendly and mutually beneficial relations between Japan and China is not only beneficial to the two countries but also conducive to the prosperity and stability of the world.

They said the Japanese economic community supports the two governments' joint efforts to oppose protectionism, safeguard free trade and multilateralism, strengthen such cooperation in innovation and the digital economy, and actively explore cooperation in a third market, so as to achieve win-win benefits.