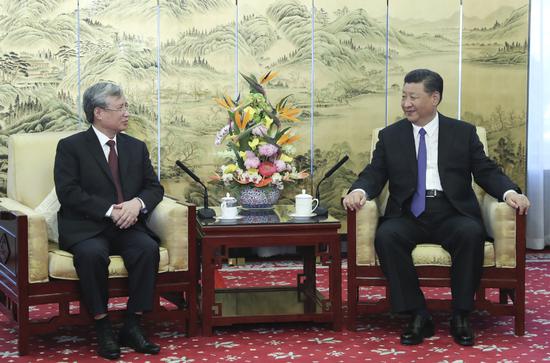 China is ready to have in-depth communications with Vietnam on major issues of overall and strategic importance to move bilateral ties forward, Xi Jinping, general secretary of the Communist Party of China Central Committee, said on Monday.

Xi, also president, made the remark in a meeting in Beijing with Tran Quoc Vuong, a member of the Political Bureau of the Central Committee of the Communist Party of Vietnam and executive secretary of the Secretariat of the CPV Central Committee.

Commenting that good momentum for developing China-Vietnam relations has been consolidated, Xi said the two sides should intensify the synergy of development strategies and policy communications with each other and keep deepening their pragmatic partnership.

Xi said the two countries should work together to push for substantial progress in joint maritime development by effectively mitigating differences through dialogue and consultations.

This year marks the 10th anniversary of the comprehensive strategic cooperative partnership between China and Vietnam.

Xi said the past decade has witnessed great progress in bilateral ties, which have promoted the countries' development, enhanced the well-being of the two peoples and made contributions to advancing the world's socialist undertakings as well as safeguarding regional peace and stability.

Coupled with profound and complex changes in the regional and international landscape, the socialist undertakings of China and Vietnam have entered the new era, Xi said, adding that both countries are facing both opportunities and challenges.

China is ready to work with Vietnam to keep bilateral ties moving forward on the right track, Xi said.

Noting that the two parties have a common language in party-building, Xi said the CPC is ready to boost exchanges and mutual learning with the CPV, push for "the great project" of party-building across the board and continuously improve the governance capability of the two parties.

Vuong said Vietnam values the traditional friendship with China and gives priority to developing friendly relations with China. His country is willing to work with China to advance bilateral relations in a steady, stable and healthy manner, he added.