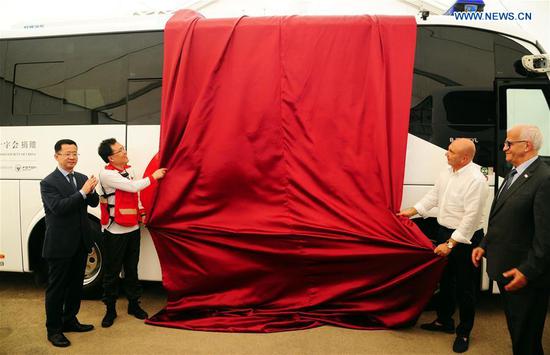 Officials from the Red Cross Society of China (RCSC) and Syria's Arab Red Crescent (SARC) inaugurate a mobile medical clinic at the donation ceremony in Damascus, Syria, on Aug. 16, 2018. (Photo/Xinhua)

There is no Chinese military presence in Syria, and Beijing firmly supports the peaceful settlement of the Syrian issue, a Chinese envoy said on Monday.

Some media reports on China's participation in military operations in Syria misunderstand and misinterpret Beijing's policies, Xie Xiaoyan, special envoy on the Syrian issue, said at a news briefing in Beijing after his visit to Syria, Saudi Arabia and Israel last month.

Media covering the issue have since clarified their reports, Xie added.

"Resolving the Syrian issue by political means is the common aspiration of the global community, and there is no way out through military operations," the envoy said.

Xie expressed concern over the current situation in Syria, urging the international community to take measures to prevent Syria from further disintegration.

Syria's sovereignty, independence and territorial integrity should be respected and maintained, the Chinese envoy said, adding that the United Nations should be the main channel of mediation on the Syrian issue.

China called upon all relevant parties in Syria to "find a solution that is in line with the real situation and balance the interests of all parties through political talks", he said.

The envoy said that China has always played a positive and constructive role in promoting a political solution and has contributed its wisdom to solving the crisis.

China participated in many global conferences related to the Syrian issue and has invited delegates from the Syrian government and opposition parties to visit China to promote a political settlement, he said.

In May, an international symposium on the Syrian issue was held in China for the first time.

The envoy said that the Syrian crisis had resulted in an enormous number of refugees, both inside and outside the country.

Some refugees choose to return to Syria, but infrastructure and public services are insufficient, and it is difficult for them to find jobs. And those who have fled abroad create a huge burden for receiving countries, he said.

He noted that solving the refugee crisis requires advancing the political settlement process as well as improving people's livelihoods through development to create the necessary conditions for the return of refugees.

China pays close attention to the humanitarian situation in the war-torn country and has taken major steps to ease the suffering of the people, he said.

Xie noted that China will also actively participate in the reconstruction of Syria once security is restored.

Reconstruction is a project that requires basic security, he said, adding that the major task is to bring peace and stability to Syria and all parties should make efforts in this regard.

In May, China held a reconstruction training course for Syrian officials, businesspeople and scholars in Shanghai.

Regarding terrorism, Xie emphasized that appropriate measures should be taken to eradicate such activities.

China supports the international community in strengthening cooperation in fighting terrorism and upholding international and regional peace and stability, he said.