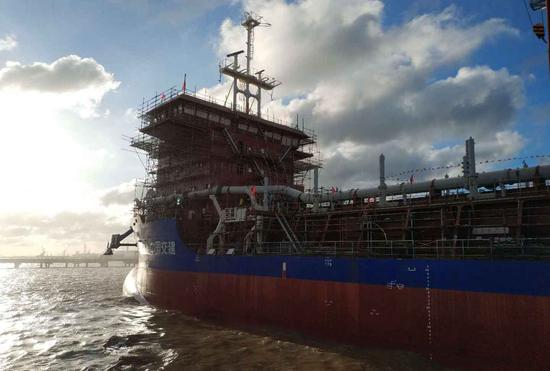 For the first time, China has built two identical giant vessels for land reclamation. They will be used in infrastructure projects both in China and in countries along the Belt and Road.

Their completion is a milestone, marking the beginning of China's mass production of ships for land reclamation.

The construction team says each ship is able to hold 65,000 cubic meters of mud. That's equivalent to the size of an eight-story apartment building. But engineers say the 100-meter-long and 30-meter-wide ships are just "medium-sized."

"China has built much bigger ships than these two. But the purpose of having smaller ones is to make them more nimble in narrow rivers or shallow waters," said Zhu Lin, general manager assistant of China Communication Construction Company (CCCC)'s Shanghai Dredging Company.

The two ships were completed in 10 months. Just like building an urban high-rise, it takes scaffold, cranes, and hardworking engineers.

They were built simultaneously in the dry dock in Nantong, about 100 kilometers north of Shanghai. A high dam had blocked the Yangtze River. When the gate was opened and water flowed in on Sunday, the ships were able to sail.

"Each ship is equipped with a long cannon-like pipe where the mud can be blown out of the ship for short-distance land reclamation operations. Thus the ship can carry out land reclamation in a distance of one kilometer away," said Feng Peihong, project manager of CCCC's Shanghai Dredging Group.

The land reclamation site is in southeastern Fujian Province. Authorities are making more land for local islanders in the hopes of improving their livelihood.

Some Chinese call the work "map editing" – a term in video games meaning users can change terrain into whatever form they like. Those twin vessels can exactly change water into land in just a few months. 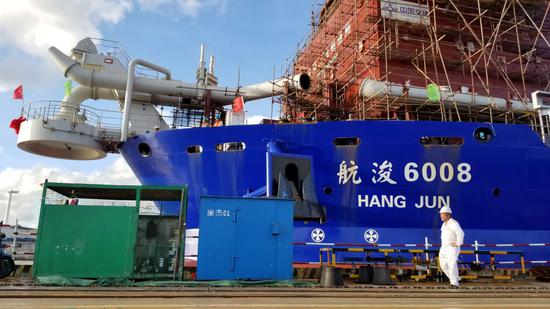 But land reclamation is just one function. The ships are more commonly used for dredging – removing mud and sand from the shores – in order to make ports deeper for larger ships.

Huo Shengyong, general manager of CCCC's Shanghai Dredging Group, said that the dredger is smaller and costs less, which makes it "a good choice for developing countries."

He added, "We hope they can be used in the much-needed infrastructure construction along the Belt and Road."

China is globally known for its strength in construction. And many hope that the two new ships will play a role in future infrastructure projects.