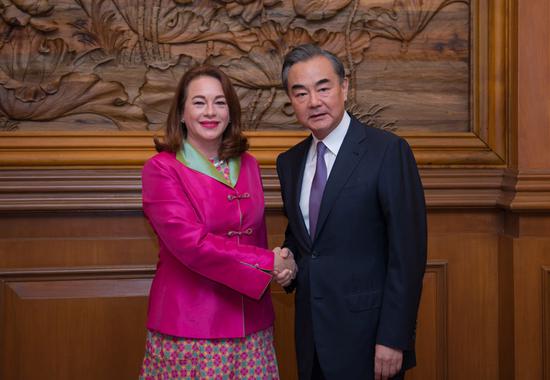 State Councilor and Foreign Minister Wang Yi made the remark in a meeting with Maria Fernanda Espinosa Garces, the newly elected president of the UN General Assembly, at the Diaoyutai State Guesthouse in Beijing on Monday.

Wang said the international landscape is undergoing profound changes and adjustments, and rising unilateralism, protectionism and populism are creating instability and uncertainty in global affairs.

The international community should safeguard the authority and role of the UN, and steer economic globalization in the direction of openness, inclusiveness, balance and shared benefits, he said.

Different parties should resolutely oppose unilateral trade protectionism, safeguard international rules and the rule of law, and protect the shared interests of all people, he said.

President Xi Jinping proposed the building of a community with a shared future for mankind, which inherits and develops the spirit of the UN Charter and testifies to the appropriate practice of multilateralism, he said.

China's Belt and Road Initiative is one of the most popular international public projects in today's world, and it is also an important vehicle for promoting multilateralism, he said.

Wang said China will provide full support to the work of the president of the UN General Assembly. China will also help the assembly improve its efficiency and capacity to cope with global challenges so that the latter can play a bigger role in safeguarding peace, promoting development and protecting human rights, which are the three pillars of the UN's work.

The new UN General Assembly president said the fact that she has chosen China as the first country to visit since her election indicates the importance she attaches to China.

She thanked China for its firm support and the constructive role it plays in promoting multilateralism and the role of the UN.

She also voiced support for the Belt and Road Initiative, saying she believes it will make a positive contribution to global development.

On June 5, the UN General Assembly overwhelmingly elected Espinosa Garces, who was formerly Ecuador's minister for foreign affairs and human mobility, as its president, making her only the fourth woman to lead the 193-member world body in its 73-year history.

She will succeed Slovakia's Miroslav Lajcak and preside over the 73rd session starting from September in a tenure that lasts one year.