Chinese FM calls for cooperation and development with ASEAN countries 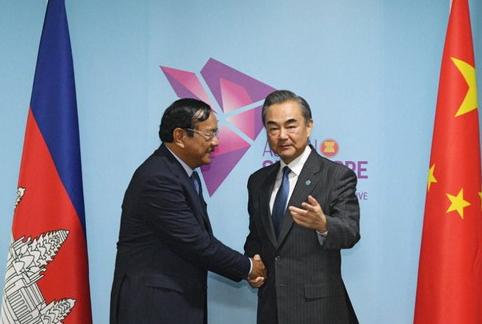 China and Cambodia Wednesday vowed to jointly uphold multilateralism to maintain peace and stability in the region.

When meeting with Cambodian Foreign Minister Prak Sokhonn, Chinese State Councilor and Foreign Minister Wang Yi said in the current highly uncertain international circumstances, China and Cambodia, together with other countries in the region, shall utter a loud voice of supporting multilateralism, opposing unilateralism and protectionism.

China and Cambodia should jointly maintain regional peace and stability and promote common development among countries, said the Chinese official.

He said that China and Cambodia need to keep close high-level exchanges, jointly push forward the construction of the Belt and Road Initiative, and enhance cooperation in agricultural products, education, culture and other areas.

Wang said both China and Cambodia, as best friends and close partners, have made special and grand arrangements to celebrate this year, which marks the 60th anniversary of China-Cambodia diplomatic ties.

For his part, Prak Sokhon said Cambodia appreciated China's resolute support over the years, hoping China will continue its valuable support to Cambodia's stability and development in the future.

"Cambodia is willing to communicate with China closely, and join hands with China in maintaining multilateralism, international rules, and regional peace and stability," he added.

During the two visits, said the Chinese state councilor, both sides reached a consensus on deepening the comprehensive strategic cooperation and outlined the guidelines to build a community of shared future with strategic significance.

Wang said China is willing to maintain high-level exchanges with Laos and boost the construction of key projects of the Belt and Road Initiative, including the China-Laos economic corridor and the China-Laos railway.

On the upcoming ASEAN-related foreign minister meetings, Wang said China is keen to work with Laos and other ASEAN (Association of Southeast Asian Nations) countries to make the meetings focus on cooperation and development. 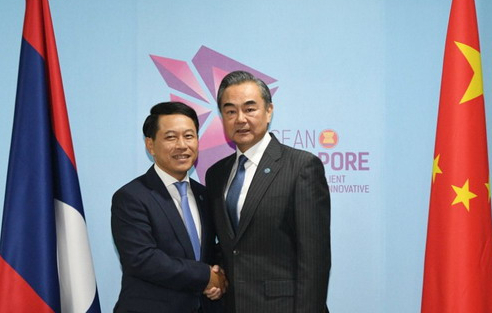 The Lao official said Laos is willing to implement the consensus reached during visits of President Xi Jinping and President Bounnhang Vorachit, advance the building of the Laos-China community of shared future and work together to maintain the regional peace and stability.

Wang also met with the Norwegian Foreign Minister Ine Eriksen Soreide on Wednesday. He said China and Norway advocate free trade and both sides should accelerate negotiations for a free trade agreement to safeguard the rule-based global free trade system.

Wang said China and Norway should mutually respect each other's core interests and major concerns, and consolidate mutual trust so as to continuously develop bilateral relations.

Soreide, for her part, said Norway is willing to strengthen communication and cooperation with China, and jointly maintain the rule-based international order and multilateral trade system.

Norway is delighted to see that both sides have made a rapid recovery and development after the normalization of bilateral ties, said the Norwegian foreign minister.

Norway respects China's sovereignty and territorial integrity and respects China's core interests and major concerns, she noted, adding that her country hopes to enhance high-level exchanges with China to boost cooperation in economy and trade, marine economy and winter sports.