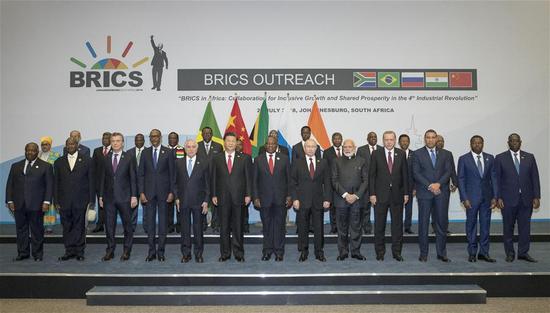 The BRICS leaders pose for a group photo with leaders or representatives of the leaders from invited countries, and heads of regional organizations in Africa in Johannesburg, South Africa, July 27, 2018. (Photo/XInhua)

Wang made the comments while briefing reporters on the conclusion of Xi's 10-day visit to countries in Asia and Africa.

According to the Chinese State Councilor, the most significant achievement made throughout Xi's visit to the UAE is that the two sides have agreed to upgrade bilateral ties to a comprehensive strategic partnership in a joint statement.

The advancement will keep China-UAE ties at the forefront of the general relationship between China and the Middle East and Gulf countries, Wang said.

China's Belt and Road Initiative (BRI) is highly in tune with the Revitalizing the Silk Road Concept proposed by the UAE, and the memorandum on cooperating on the BRI signed between the two countries will strengthen the alignment in strategies and communication in industrial policies, Wang stressed, adding that the almost 20 documents signed cover areas of trade and investment, finance, energy, agriculture and culture.

The Chinese state councilor also said Xi's trip to the UAE provided a solution to address the root cause of regional instability. He said Xi's proposal to insist on political solutions, promote peace through development and boost global collaboration on eliminating extremism was highly praised in and outside the region.

President Xi's visit to the African countries has solidified the foundation of mutual trust between China and the region, Wang said.

He noted that Xi emphasized that developing cooperation with African countries is China's long-term and unswerving strategic choice, and that China will stick to a friendly and honest policy toward Africa despite changes in the international arena.

During the bilateral meetings between Xi and his counterparts in Senegal, Rwanda, South Africa and Mauritius, consensus has been reached to deepen political trust, support and understand each other on issues involving common interests and concerns, and in exploring their own paths of development, Wang said.

Wang emphasized that the African leaders praised China's great contribution to the African economy and society, saying the cooperation between China and Africa is win-win, refuting the so-called "neo-colonialism" touted by some.

The Chinese state councilor pointed out that Xi's visit has also broadened the prospect for China-Africa collaboration.

Wang said President Xi put much emphasis on African countries' ability to develop and attract foreign investment independently, saying China wants to "teach Africans to fish instead of giving them a fish."

During the visit, China and the four African countries have agreed to exert their own advantages to complement each other's economies and explore new opportunities for cooperation, Wang concluded, stating that about 40 documents were signed and many are big projects that will benefit peoples of both sides.

The BRICS bloc and global governance

High on President Xi's agenda during the African trip is his participation in the 10th BRICS Summit in Johannesburg.

At China's initiative, this year's summit for emerging nations including Brazil, Russia, India, China and South Africa has decided to establish a partnership on a new industrial revolution, Wang said.

Xi's visit has also put a strong emphasis on the reform of global governance, the Chinese state councilor pointed out. He cited Xi's remarks about calling on the BRICS countries to seize the opportunities of development in the next decade and uphold multilateralism against protectionism and unilateralism, saying they have brought positive energy into the current world, which is full of uncertainties.

Wang said including more emerging markets and developing nations in dialogues is a way to improve the BRICS' influence and ability to solicit cooperation.

During Xi's time in Johannesburg, he also held bilateral talks with leaders from the BRICS countries, as well as those from other countries such as Uganda, Turkey and Argentina, Wang said.

During this visit, President Xi also explained China's philosophy on development and introduced the Chinese experience while having exchanges with leaders from emerging markets and developing countries, according to Wang.

Wang said Xi shared China's practice and experience in fields like the development of the ruling party, the reform of economic structures and poverty alleviation in a targeted manner.

He said Xi's counterparts expressed admiration for China's achievement and highly recognized Xi's philosophy on the governance of China.

The Chinese president also invited leaders he met during the visit to participate in the First China International Import Expo slated for November in Shanghai, Wang stressed.

Wang said this shows China's long-standing position on opening-up and sharing its development dividends with others.