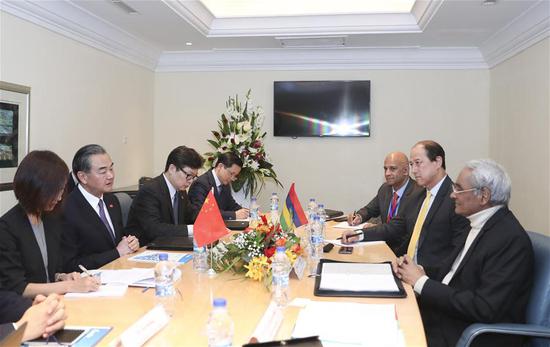 Chinese State Councilor and Foreign Minister Wang Yi said here on Saturday that President Xi Jinping's visit to Mauritius is of milestone significance in the history of the bilateral relations.

Wang, who accompanied Xi in his friendly visit to Mauritius, made the remarks when meeting with his Mauritian counterpart Vishnu Lutchmeenaraidoo.

He called on the two countries to strengthen contacts to make sure that the consensus reached between the two countries' leaders is implemented, and to promote the sustainable and in-depth development of the bilateral relations.

Mauritius' active participation in the construction of the Belt and Road will create new space for the mutually beneficial cooperation between the two countries, Wang said.

China expects to work with the African countries that will attend the Forum on China-Africa Cooperation (FOCAC), including Mauritius, to ensure the upcoming Beijing summit a complete success, Wang said.

For his part, Lutchmeenaraidoo said his country is ready to implement the outcomes of Xi's visit with China.

He said Mauritius firmly upholds the one China policy, fully supports the Belt and Road Initiative and is willing to negotiate and sign a bilateral free trade agreement with China at an early date.