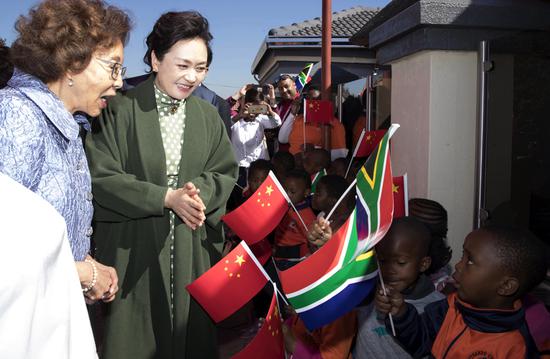 Peng Liyuan, the wife of President Xi Jinping and a UNESCO special envoy for the advancement of girls' and women's education, visited a preschool in a suburb of the South African capital Pretoria on Tuesday.

Peng was accompanied during the visit by Tshepo Motsepe, wife of South African President Cyril Ramaphosa, and a representative of the African Self Help Association Trust.

Scores of South African children waved the national flags of China and South Africa and shouted, "Welcome, welcome" in Chinese and English as Peng arrived at the Uthando Day Care Preschool in the capital's east suburbs.

It was the first time that the wife of the head of a foreign state visited the facility, Motsepe said, adding that Peng's visit was meaningful.

The children sang in Chinese Yong E (An Ode to the Goose), a short poem written in China's Tang Dynasty (618-907). Peng applauded their pronunciation and invited the children to visit China when they grow up.

In a classroom at the day care center, the children concentrated on drawing the national flags of both countries. Peng walked over to a child, bent over to watch him paint the Chinese national flag and praised him for his artistry.

Peng then gave the children toys, stationery and books.

She said children are the future of a country.

Moral education is the most important part of early education, when children should be guided to reach high and cultivate their moral character, she said.

Peng called on the children to carry forward the friendship between China and South Africa when they grow up.

Also on Tuesday, Peng attended a graduation ceremony for preschool teachers in Pretoria.

The graduates performed South African songs and dances to welcome the Chinese guests.

To help the children realize their dreams and eventually carry forward the cause of national rejuvenation and prosperity, teachers should always bear in mind the expectations and responsibilities entrusted to them by their country, maintain a high standard of professional and personal ethics, stay benevolent and never give up learning, she said.

She urged the teachers and students to dedicate themselves to the cause of friendly cooperation between China and South Africa and make contributions to the development of bilateral relations.

The preschool teachers training program is undertaken by the African Self Help Association Trust, which has served thousands of people in poverty-stricken neighborhoods.