10 years on: How has BRICS performed over the last decade?

BRICS is an acronym for the economies of Brazil, Russia, India, China and South Africa, and it has done much to influence the global economy and geopolitics.

Jim O'Neill, the economist who coined the BRICS phrase, believes that the group has performed better than even he had thought.

Paulo Nogueira Batista Jr., the vice president of the New Development Bank (NDB), also suggested past decade has showed the BRICS mechanism is "a working one." 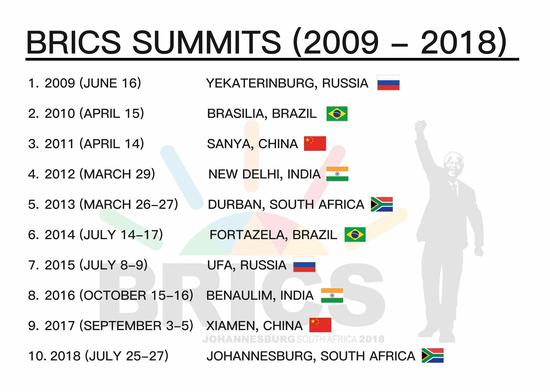 The group has come a long way since its first meeting, which was held in 2009 due to the global financial crisis, and happened without South Africa, which joined in 2010.

In 2014, with a view to institutionalize their international economic cooperation, the five countries established the NDB and the Contingent Reserve Arrangement (CRA) facility.

Last year in Xiamen, the bloc agreed to re-dedicate themselves to a second "golden decade" of partnership based on principles and aspirations that had originally bound them together a decade ago.

Along the way, the formation of the NDB was "one of the achievements of the BRICS," Lerato Mataboge, South Africa's director general in the Department of Trade and Industry, Trade and Investment, said.

Founded by the BRICS member states in 2014, the NDB opened in Shanghai in July 2015 and became fully operational in early 2016.

"The NDB has achieved significant progress since it launched business in Shanghai," Batista Jr. said, adding that "the bank has approved 11 projects, most of which are for sustainable infrastructure development."

Altogether, the bank has 23 projects which are in various stages of preparation for 2017-2018, with a total lending amount of six billion US dollars.

Also, the BRICS has made significant progress on the financial integration of its members.

Wang Jianzhou, China's consul-general in Durban, said BRICS had brought concrete benefit to the millions of people in the five member states.

"Over the past 10 years the BRICS total GDP has grown by 179 percent, trade expanded by 94 percent,” he said in a panel discussion at the 10th BRICS round table discussion in Durban.

The rate of economic growth in the bloc has far outpaced the world’s average – and the expectations of many, Jeremy Stevens, an economist with the South African Standard Bank, said at a BRICS economic forum in Beijing. From 2008 to 2017 the world’s average growth rate was around one percent, but that of BRICS nations was expected to reach eight percent.

This optimism has been bolstered by statistics released by China’s Ministry of Commerce, which showed that over the past 10 years, the BRICS increased its share of aggregate global economic value from 12 percent to 23 percent. 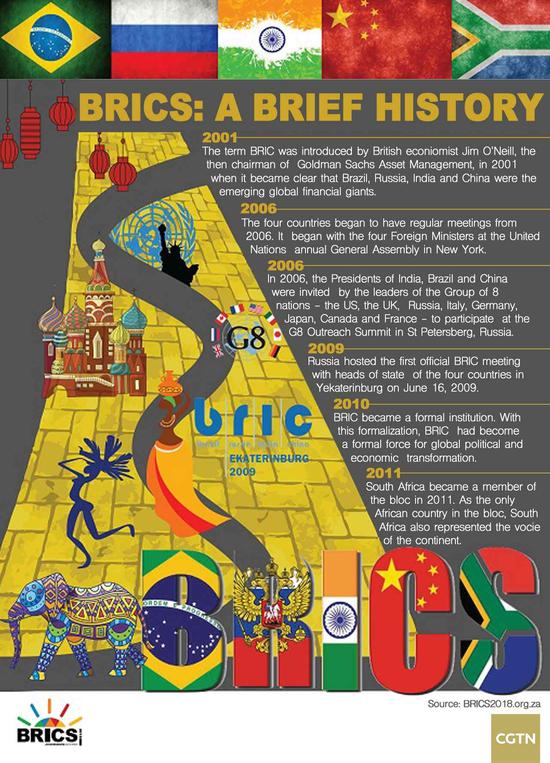 Meanwhile, the BRICS mechanism has already proved its efficacy as a channel for improving multilateral orders.

Noting that only by discussing worldwide political issues with other countries on an equal basis can the group free itself from the multiple shackles, the BRICS has quickly shifted focus from mere economic cooperation to comprehensive participation in global governance.

For example, during the summit in Fortaleza, Brazil, a dialogue with the leaders of South American countries was held.

On the sideline of the Ufa summit in Russia, the BRICS leaders convened a dialogue with leaders from the Eurasian Economic Union (EEU) member states and the Shanghai Cooperation Organization (SCO) members and observer states.

And China upgraded “BRICS+N” to “BRICS+" at the Xiamen summit, that is, the dialogue held alongside the summit was not limited to regional developing countries, but instead covered representative developing countries around the globe, thus greatly expanding the circle of friends.

In this respect, the BRICS has shown global vision that stands out from both strategic and historical perspectives, thus winning respect from around the world.