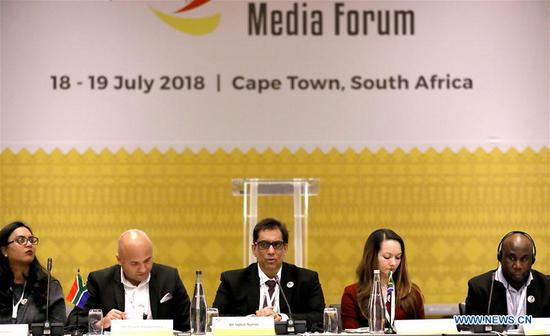 The 2018 BRICS Media Forum concluded Thursday after leaders of mainstream media organizations agreed on an action plan to promote media cooperation during 2018-2019.

The action plan said consensus was reached after in-depth exchanges on topics including media's role and responsibility in strengthening the BRICS narrative, enhancing cooperation among new media in BRICS countries, as well as media cooperation between BRICS and Africa.

The participating media organizations believed the world is undergoing major development, transformation and adjustment amid growing uncertainties and destabilizing factors, but building a community of common destiny remains the main objective for the development of humanity, it said.

In keeping with the BRICS spirit of openness, inclusivity and cooperation, and to contribute to a brighter future of mankind, the action plan urged BRICS media organizations to improve mutual learning and draw on each others' experiences, further promote personnel exchanges and expand information exchanges.

It called for taking full advantage of new media like the Internet and social media, spreading good stories of BRICS cooperation and creating new highlights of BRICS reporting.

In terms of exchanges of personnel, the action plan said the BRICS countries should develop an education network to develop young journalists and establish a BRICS media academy for journalists, which will include workshops to be held wherever BRICS meetings are staged.

It also called for efforts to identify how BRICS media organizations can create an environment in which there can be people-to-people exchange between journalists and media people throughout the BRICS community, stressing that the BRICS media participants agreed to carry out a cooperative action plan in the spirit of equity, pragmatism and mutual benefit.

To acknowledge the significance of the day, July 18, which was the centenary commemoration of Nelson Mandela and the opening day of the two-day event, the meeting agreed to adopt the "Cape Town Declaration 2018", which called for striving to learn from each other and to create pathways for sharing of content, news and upholding the principles of responsible journalism and put measures in place to limit the spread of fake news.

In the document, the BRICS member media organizations said they would stand united and in one voice to declare that they should be included in the opportunity to report in a free and unbiased manner on issues pertaining to their own and member countries.

A total of 48 media organizations from the five BRICS countries of Brazil, Russia, India, China and South Africa, as well as from African nations including Namibia, Zambia and Ghana, among others, participated in the event.