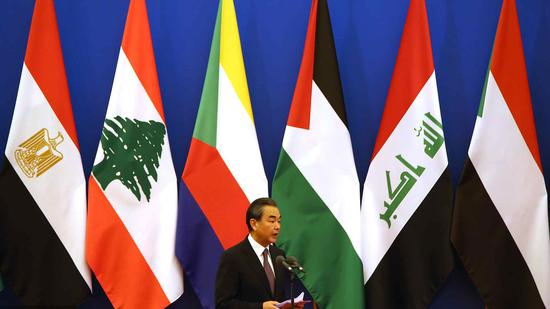 Wang said the Palestinian issue should not and will not be marginalized, and China will continue to contribute its own efforts into pushing forward the just cause of establishing an independent country for the Palestinian people.

"This year marks the 30th anniversary of the establishment of diplomatic relations between China and Palestine. China is willing to take this opportunity to promote greater development of bilateral relations," Wang added. 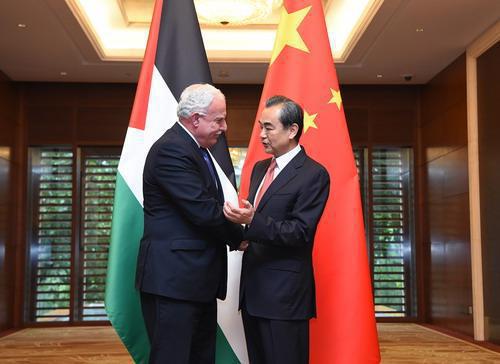 He fully agreed with Xi's proposal to establish an Arab-China strategic partnership, as well as to build an Arab-China community with a shared future.

Malki confirmed his country's stance on actively supporting the Belt and Road Initiative and its willingness to deepen the pragmatic cooperation with China under this framework.

Apart from Palestine, other Arab countries' foreign ministers have also echoed Wang's proposal for deepened collaboration, especially under the Belt and Road framework.

When meeting with Ahmed Isse Awad, the minister of foreign affairs and international cooperation of Somalia, Wang said China welcomes the active participation of the Somali side in the Belt and Road cooperation.

The friendship between the two sides is profound, Wang said, adding that Somalia is the first Eastern African country to establish diplomatic relations with China, and also one of the sponsors supporting the restoration of the legitimate seat of the People's Republic of China at the United Nations.

Wang also said that China has always stood firmly on the side of the Somali people and supported its peace process during the difficult years of war in the country.

Awad confirmed his country's gratitude to China for its long-term support and help, saying Somalia has always adhered to the one-China policy and resolutely opposed "Taiwan independence."

Somalia actively supports the Belt and Road Initiative, and hopes to strengthen cooperation with China in the fields of infrastructure, agriculture, fishery, human resources development and capacity building by participating in the Belt and Road co-construction process in order to drive its own development, Awad added.

While speaking with Mauritanian Foreign Minister Ahmed Ould Teguedi, Wang and his counterpart both expressed the willingness to strengthen cooperation under the Belt and Road Initiative.

The Mauritanian top diplomat pointed out that his country expects more cooperation with China in areas like infrastructure construction, agriculture and fishing industries, and he welcomes more Chinese enterprises to invest in his country.

In talks with Tunisian Foreign Minister Khemaies Jhinaoui, Wang and Jhinaoui both spoke highly of each other’s country’s efforts in dealing with hotspot topics in the Middle East like the Palestinian and Libyan issues, and vowed to reinforce coordination.

Jhinaoui said the success of the eighth ministerial meeting of the CASCF proves again that China has always been a good friend and partner to Arab and African countries.

He added Tunisia places great importance on the Belt and Road Initiative and hopes to be the anchor of this initiative in Northern Africa.

Yemen’s Minister of Foreign Affairs Khaled al-Yamani was also among the Arab diplomats that Wang held conversations with.

Wang emphasized that China is behind Yemen’s pursuit of independence, national sovereignty and territorial integrity, and will continue to provide the country with humanitarian aid.

Al-Yamani thanked China for its long-term assistance to Yemen’s economy and expects China to keep playing a significant role in resolving the Yemeni issue and participating in the country's reconstruction.

In talks with Mohamed Taha Siala, foreign minister of the Libyan Government of National Accord, Wang said China hopes Libya could return to the track of enjoying peace, stability and the rule of law.

China will work together with the Libyan government and push for the resumption of exchanges on different levels.

Siala said China is welcomed to continue playing a key role in solving the Libyan issue politically and actively taking part in the country’s reconstruction, particularly by encouraging Chinese enterprises to invest in Libya.

The two sides have also signed a memorandum of understanding concerning cooperation under the Belt and Road Initiative.