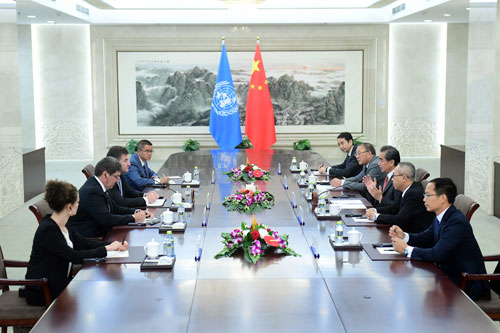 Wang made the remarks when meeting with visiting President of the 72nd session of the United Nations General Assembly Miroslav Lajcak in Beijing.

Wang called for more joint efforts to promote dialogue and consultations as the way to resolve regional issues and to deal with global threats and challenges including terrorism and climate change.

“We can now say that you are a successful president of the UN General Assembly. You have left your mark on the UN, representing the international responsibility of your home country Slovakia, and building a good example from that.”

Lajcak said the international community welcomes China's increasingly important role in global affairs, and the country has now emerged as one of the main contributors to the UN budget and financing for development.

“I would also like to take this opportunity to congratulate you, appreciate and welcome China’s recent pledges to join the new UN Peacekeeping Capability Readiness System, to take the lead in setting up a permanent peacekeeping police squad and building a peacekeeping standby force of 8,000 troops. And also you have pledged to provide 100 million (US dollars) to the African Union to create an immediate response unit capable of responding to emergencies."

Lajcak is paying a visit to China from July 1 to 3.