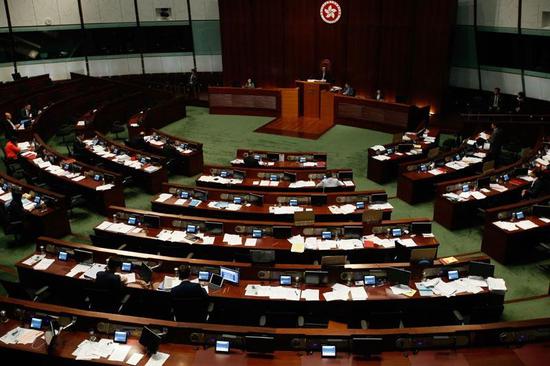 The six-hour third reading of the bill was adopted with 40 votes to 20 - with one abstention.

The co-location arrangement, which will be implemented at the West Kowloon Station in Hong Kong, allows passengers to complete Hong Kong and mainland clearance procedures in one go.

Welcoming passage of the bill, Chief Executive Carrie Lam Cheng Yuet-ngor said it was a "big leap" toward the final objective – commencing operations of the Hong Kong section of XRL in September.

Passage of the bill also provides a legal basis to allow the Hong Kong section of the high-speed railway to maximize its transport, economic and social benefits, added Lam.

The CE said she appreciated legislators' support, as well as the backing of the central government and Hong Kong society.

Responding to legislators' arguments during deliberation on Thursday, Secretary for Transport and Housing Frank Chan Fan said the advantages of the high-speed rail link and its contribution to Hong Kong are a "hard fact".

The express railway will also provide business and development opportunities for the city's young people. It will also bring convenience to local residents, he added.

Chan also suggested legislators view the high-speed rail with an open mind, adding that "time will prove everything".

The legislature's three readings of XRL co-location bill has taken five and a half months, as the first reading of the arrangement finished on Jan 31 and the second on Wednesday.

However, completion of the second-reading of the bill did not go smoothly. Five opposition lawmakers were evicted from the chamber following inappropriate remarks and conduct; police were also called in to investigate injuries suffered by two security guards.

These five evicted legislators were not allowed to participate in the debate and vote on the bill on Thursday.

The co-location arrangement aims to speed up the immigration process and maximize the efficiency of the high-speed rail system. Under the bill just passed, one-fourth of the West Kowloon Station will be designated as a Mainland Port Area, with national laws applied.