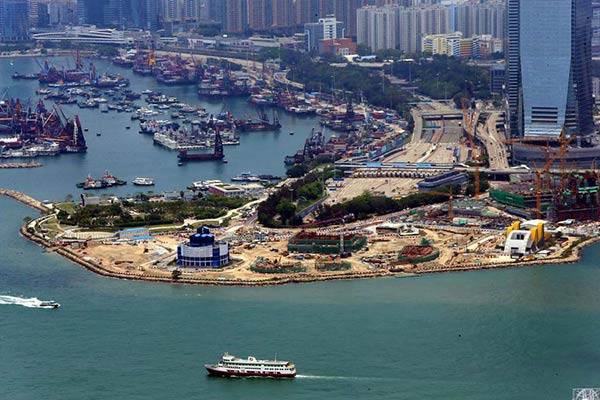 A view of the West Kowloon Cultural District, Hong Kong, which is under construction, from Victoria Peak on April 30, 2017. (Photo/Xinhua)

Since the central government is advancing coordinated development of the Pearl River Delta with the Hong Kong and Macao special administrative regions with the aim of it becoming the world's leading bay area by GDP, few doubt the importance of the Guangzhou-Shenzhen-Hong Kong Express Rail Link (XRL) in helping Hong Kong consolidate its status as a key global financial, shipping and trading center, and enhancing its overall competitiveness.

Not only is the Hong Kong section of the high-speed rail link a crucial element in the bid for a "one-hour travel zone" encompassing all the major cities around the Pearl River Delta. It is also significant as it will connect Hong Kong with the mainland's high-speed railway network, which in turn is envisioned as being part of a high-speed rail network that extends throughout the region and beyond, as part of the country's Belt and Road Initiative.

Thus the cooperation agreement signed on Saturday between the Guangdong and Hong Kong governments on the proposed co-location arrangement for boundary control at the West Kowloon terminus of the XRL is an important step for the closer integration of the Greater Bay Area. It is also essential for ensuring the future prosperity of Hong Kong. The agreement formally commences the three-step process to implement the arrangement that will allow officers from both sides to complete exit and entry clearance procedures for cross-boundary passengers at the same location.

This is an essential requirement if the Hong Kong section of the nation's high-speed rail network is to realize its full economic benefits and make the mega infrastructure facility worth the HK$84.4 billion (US$10.8 billion) that was invested in it.

It is widely expected that the co-location plan will complete the remaining two steps－securing the endorsement of the National People's Congress Standing Committee and completing the local legislative process in Hong Kong－in time for the commissioning of the Hong Kong section of the XRL in the third quarter of 2018.

High speed is the XRL's defining feature, and convenient cross-boundary customs, immigration and quarantine procedures are instrumental to realizing this effectively. There are already successful overseas examples of the co-location of CIQ facilities of two jurisdictions, including the arrangement between the United States and Canada, and the one between the United Kingdom and France.

There is no practical or feasible alternative to completing the co-location arrangement at the West Kowloon terminus.

Without boundary control at the West Kowloon terminus, the direct economic benefits, estimated by some experts to reach HK$260 billion, would be greatly discounted.

The three-step process, when completed, will therefore fulfill all the legal requirements for what is an absolute imperative.