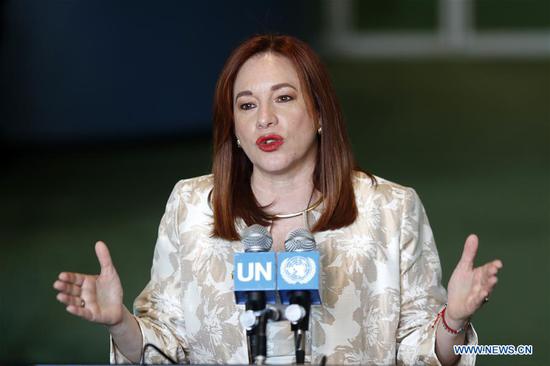 Maria Fernanda Espinosa Garces, president-elect of the 73rd session of the United Nations General Assembly, speaks to journalists during a press encounter at the UN headquarters in New York, on June 5, 2018. (Xinhua/Li Muzi)

The United Nations (UN) General Assembly on Tuesday picked Maria Fernanda Espinosa Garces, Ecuador's minister for foreign affairs and human mobility, to be its next president.

The 193-member General Assembly, one of the highest policy-making bodies at the United Nations, will have a woman presiding over it for the fourth time in UN history.

Garces beat Mary Elizabeth Flores Flake, permanent representative of Honduras to the United Nations, by 128-62 votes. She will succeed Slovakia's Miroslav Lajcak and preside over the 73rd session starting from September. The tenure is for a year.

"We have the challenge of building a stronger and more efficient organization," Garces said after winning the election, adding that "strengthening multilateralism is not an option, it is an obligation."

"Therefore, it is urgent that the United Nations show the capacity to respond to the main global challenges, and that the organization is brought closer to the people, connecting its decisions directly to its beneficiaries, the citizens of the world," she noted.

Highly commending what the General Assembly has achieved under the leadership of Miroslav Lajcak and extending his warm congratulations to the president-elect, UN Secretary-General Antonio Guterres noted that "it has been more than a decade since a woman has served as president of the General Assembly, when Sheikha Haya Rashed Al-Khalifa of Bahrain was president of the 61st session."

"The world faces urgent and complex challenges, from churning conflicts to rising inequality and the deepening impacts of climate change," the UN chief noted.

"This Assembly, the global town hall, has a vital role to play in debating the issues and, most of all, in delivering solutions that make a meaningful difference in people's lives," he added.

By tradition, the UN's regional groups nominate a single candidate who is then approved by the Assembly. But this year the election was being contested for the first time since 1991, because Latin American countries (LAC) couldn't agree on a nominee.

Lajcak invited both candidates to appear before the Assembly members for two hours on May 4 to present their vision for the presidency and answer questions from diplomats and civil society representatives.

The issues raised ranged from conflict prevention and financing UN goals for 2030 to ending poverty and preserving the environment to transparency in the president's office, UN reforms, and gender equality.

On the basis of geographical rotation, the LAC group claims this presidency, an elected high-ranking UN position which has been overwhelmingly dominated by men.

Since 1945, the Assembly has elected only three women (excluding Espinosa Garces) as presidents: Vijaya Lakshmi Pandit of India (1953), Angie Brooks of Liberia (1969) and Sheikha Haya Rashed Al-Khalifa of Bahrain (2006). And that's three out of 72 presidents.

Espinosa Garces, born on September 7, 1964, is an Ecuadorian politician and diplomat. She was Minister of National Defense of Ecuador from November 2012 to September 2014. Currently, she is serving as Minister of Foreign Affairs under President Lenin Moreno.

She also held several other ministerial posts before. She served as the Permanent Representative of Ecuador to the United Nations in Geneva from October 2014 to May 2017, and held the same position from 2008 to 2009. Besides her political career, she is also a poet and essayist.