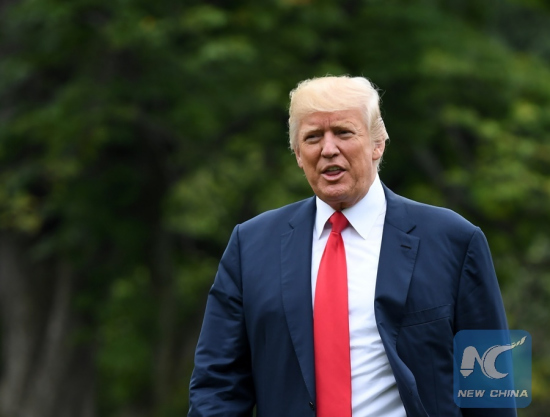 File Photo: U.S. President Donald Trump walks to his office from Marine One as he returns to the White House in Washington D.C., the United States, on Aug. 14, 2017. (Xinhua/Yin Bogu)

Suggesting that premiums under Obamacare "have gone skyrocketing," Trump labeled his executive order as "first steps to providing millions of Americans with Obamacare relief" before signing the document at the Roosevelt Room of the White House.

Though the executive order won't be able to wipe away the country's health care reform law, the president can use it to direct how the law is carried out.

The order, according to Trump, asks several government departments to take action to "increase competition, increase choice, and increase access to lower-priced, high-quality healthcare options" while costing the U.S. government "virtually nothing."

The Trump order proposes to allow more small businesses to form associations to buy affordable and competitive health insurance and expand these associations and health care plans across state line so as to create what the president called tremendous competition and low prices.

He also instructed to find ways to allow more businesses to use tax-free health reimbursement arrangements to compensate their employees for their healthcare expenses.

The executive order is viewed as Trump's most concrete action to undo the ACA, a signature domestic policy by former President Barack Obama, after Senate Republicans had repeatedly failed to pass legislation to dismantle the 2010 law, a promise Trump has made to his voters.

Trump said congressional Democrats broke the U.S. healthcare system seven years ago "by forcing the Obamacare nightmare onto the American people," saying that "the cost of Obamacare has been so outrageous it is absolutely destroying everything in its wake."

Republican Senator Rand Paul of Kentucky, who stood behind Trump at the signing ceremony, backed the president's move, saying that it would "reduce government interference and provide more affordable health care options to everyday Americans."

Democrats, who have consistently opposed the GOP's efforts to repeal and replace Obamacare, voiced their opposition against the executive order.

Senate Minority Leader Chuck Schumer of New York tweeted that Trump is "using a wrecking ball to singlehandedly rip apart and sabotage" the country's health care system after attempts to repeal the ACA failed in Congress.

Though he managed to circumvent the legislative process to push for his plans, Trump, who often blasted Obama on executive orders, would still need Congress help to eventually fulfill his promise to end Obamacare.

"We're going to also pressure Congress very strongly to finish the repeal and the replace of Obamacare once and for all," Trump said.