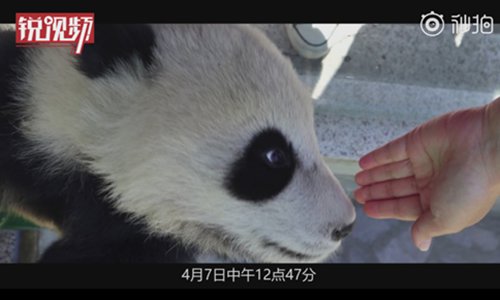 A visitor to a giant panda research park has received some heavy criticism after snapping a photo of her hand touching one of the bears, leading the park to raise barrier that separates people from pandas.

The visitor, surnamed Han, a college student, posted pictures on her Weibo account that showed her reaching over a guard rail and touching the head of a panda dub at the Shenshuping base of the China Conservation and Research Center for the Giant Panda in Southwest China's Sichuan Province. "It took some effort but I finally touched the panda," she wrote.

While many on Sina Weibo lambasted Han for breaking the don't-touch rule, others questioned the design of the panda enclosure. One section of the panda pen's barrier is only 1.6 meters tall.

An online video shows earlier attempts by visitors to lure pandas within touching distance. Another sequence of the video shows how a young cub managed to awkwardly climb on top of the railing before zoo workers arrived and carried him away.

"We are raising the height of the fence," an employee at the panda base told the Global Times on Wednesday.

Han tried to defend actions saying the pandas voluntarily wandered over to her as she stood by the short barrier wall.

However, netizens said she was making an excuse and could not forgive her behavior.

"The bacteria on Han's hand could be harmful if it was transmitted to the giant panda and cause them to get sick," one netizen wrote.