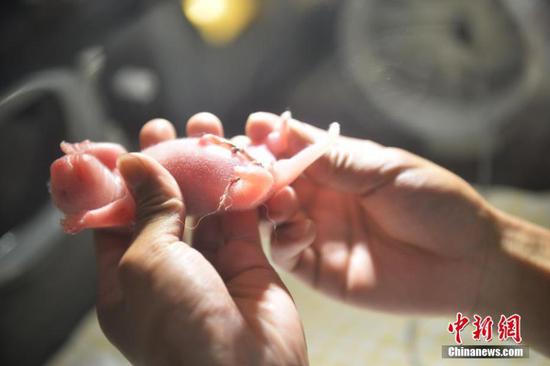 A keeper takes care of a new panda cub at the Hetaoping base of the China Conservation and Research Center for the Giant Panda in Sichuan Province. (Photo: China News Service/Li Chuanyou)

A pair of male-female panda twins were born to both captive and wild parents in China's Sichuan Province Wednesday afternoon, announced the China Conservation and Research Center for the Giant Panda on Sunday.

Panda Cao Cao, 16, gave birth to the twins at the Hetaoping panda base in Wolong, with the male cub weighing 215 grams and his younger sister weighing 84 grams, said Wu Daifu, director of the panda base.

The mother was released into the wild in February ahead of the mating season this year and started to show signs of pregnancy in late June.

The cubs are the first panda twins born to both captive and wild parents, marking new progress in China's efforts to increase the genetic diversity of its captive pandas. Captive pandas tend to have a high likelihood of inbreeding, causing a decline in the viability of their babies, according to Zhang Hemin, deputy director of the conservation and research center.

The mother will take care of the male cub while experts at the Shenshuping panda base in Wolong will attend to the female cub.

Having been rescued from the wild in 2002, Cao Cao grew up in captivity. On July 31, 2017, she gave birth to a male cub, the world's first panda with both captive and wild parents.