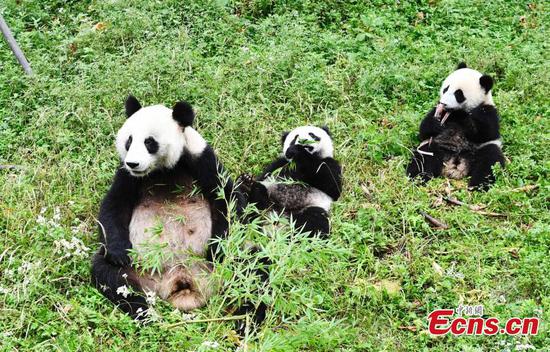 A giant panda habitat in northwest China's Shaanxi Province has started online crowdfunding to raise money for bamboo planting to solve a food shortage for the endangered animal.

"I plant bamboos for pandas" is a crowdfunding projects listed on yiwuzhishu, a website sponsored by the National Forestry and Grassland Administration for promoting vegetation.

Both individuals and companies could donate by scanning a QR code or transferring money to the official bank account at the website to support the project, which will see to the planting of 133 hectares bamboo in Shaanxi Louguantai Forest Farm in the next seven years.

The items of expenditure are set to be put on a list for public supervision on the website.

According to the administration, the Qinling Research Base of Giant Panda Breeding in Shaanxi, one of the three giant panda breeding bases in China, has 23 pandas. As each of them needs to eat 50 kg of bamboo per day, the base needs 400,000 kg of bamboo a year.

However, the local bamboo farm can only provide bamboo for two months of consumption. The base has to transport bamboo from elsewhere to fill the gap.

Pandas are picky with their food. They often waste food if it is not "tasty" or fresh enough. The bamboo farm plans to plant Bounsweet and Indo calamus, the animal's two favorite bamboo species. The expanded bamboo forest will also be prepared for free-range grazing.