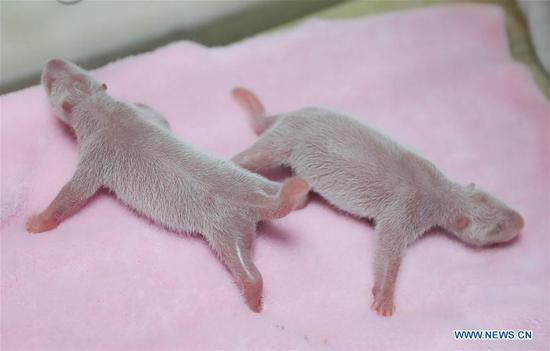 The world's first panda "pigeon pair" of the year was born on Tuesday at the Chengdu Research Base of Giant Panda Breeding in Sichuan province, bringing the number of captive pandas at the facility to 184.

It was the first time for Ya Yun — who was impregnated by artificial insemination — to become a mother, according to base chief Zhang Zhihe.

Unlike most mother pandas, Ya Yun is believed to be willing and able to take care of her two babies, he said.

New mother pandas are notorious for abandoning one of their offspring if twins are born, due to an instinctual quirk.

While 50 percent of newborn pandas are twins, a mother typically chooses to care for only one. A mother panda first tries to care for both cubs. But several hours later, she realizes for some instinctual reason that she cannot, according to Zhang Hemin, executive director of the China Conservation and Research Center for the Giant Panda in Wenchuan county, Sichuan.

Mother pandas will often desert one cub, even if it cries, he said.

But Ya Yun can hold her two babies while continuously licking them clean. Both mother and babies are doing well, Zhang Zhihe said.