Farmer makes a splash with river-crossing art on bamboo 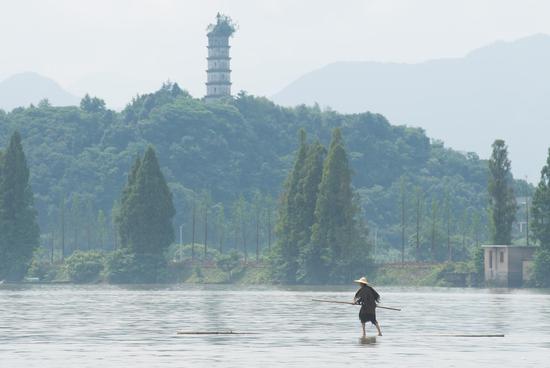 On the wide, misty Xin'anjiang River surrounded by lush green mountains, a thin Fang Shuyun wears a rain cape and a straw hat, and stands calmly on a bamboo in the water like a legendary figure from a martial art novel.

Fang, 54, is an ordinary farmer in Jiande City, in east China's Zhejiang Province. Fang does different temporary jobs to make a living, but in his spare time, he likes practicing the art of standing on bamboo in water, a hobby he has enjoyed for almost 40 years.

"When I was little, I always loved reading Chinese Wuxia (martial arts and chivalry) comic books," Fang said. "When I was a teenager, I saw an old lady practicing the art of standing on bamboo in water, and I was fascinated."

After that encounter, Fang spent more than three years trying to grasp the technique of keeping balance while on bamboo in water. He only managed to master the acrobatic skill after falling countless times into water and getting slashed frequently by bamboo hairs.