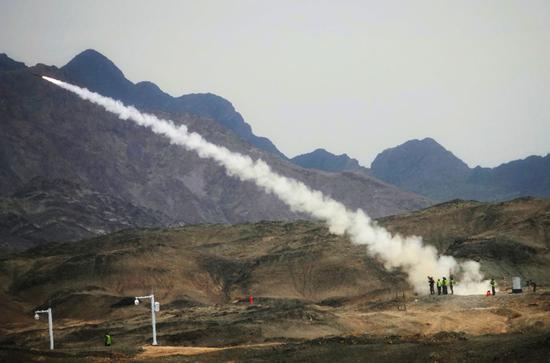 Soldiers shoot at a target during the Clear Sky contests of the International Army Games 2018 in Korla, Xinjiang Uygur autonomous region. Seven countries took part in the competition on Tuesday. (Photo/Xinhua)

The People's Liberation Army led the International Army Games 2018 after it opened on Monday, ranking first in two of the three contests held in Korla, Xinjiang Uygur autonomous region.

Eleven countries, including Russia, China, Iran and Pakistan, are participating in four contests in Korla and Quanzhou, Fujian province.

The Chinese teams took the top three places in the Suvorov Attack individual race that concluded on Wednesday and also broke their own records, reaching the finish line 29 seconds faster than last year.

They also ranked first in the Clear Sky "mastery race" for air-defense missile units on Tuesday.

Relay races for Suvorov Attack, interaction and combined races for Clear Sky will be taking place in the coming days before the final results are unveiled at the end of the games on Aug 8.

"The Clear Sky contest went safely, smoothly, completely and spectacularly," commander Hong Jiangqiang, who is also the chief judge of the contest, said on Tuesday. "The air defense units showed us a live version of Fast and Furious."

China is one of the seven countries that host the Games, which was initiated by Russian Ministry of Defense in 2014.

The contests in Russia started on Saturday at the Alabino training ground near Moscow.

Clear Sky requires teams to drive an armored personnel carrier on a closed track of about 9.5 kilometers past 12 obstacles, and fire missiles at high-speed air targets, such as a helicopter strike, in five firing areas.

The Suvorov Attack asks infantry fighting vehicles to drive 2.5 laps around a 4.3-kilometer circular track that has 11 obstacles, including a water barrier, antitank trench and side hill, and shoot down eight targets.

All teams except Russia's Suvorov Attack team used equipment domestically developed in Chinaa 92A armored personnel carrier in Clear Sky and an 86A infantry fighting vehicle in the Suvorov Attack.

In order to help foreign contestants adapt to the new equipment and master Chinese hardware as soon as possible, the PLA Army assigned a number of technical experts and experienced instructors to offer theoretical and operational training, and help solve any problems that might be encountered during the exercises.

"The shooting training provided by Chinese organizers enabled us to grasp the know-how of the equipment as soon as possible," said Lieutenant General Alvaro Prieto from Venezuela.

Sergei Gnatenko from Belarus said: "I have never touched such equipment before. It's a bit different from ours. The Chinese instructors gave us guidance in driving, shooting and loading and helped us get to know the equipment quickly. I feel very grateful."

It is the first time that Belarus took part in the competition in China and also Gnatenko's first time coming to China. He said he was impressed with Chinese soldiers' discipline and combat readiness.

Pakistani Lieutenant Colonel Kamran Zaheer said he was "highly inspired by the level of training and the quality of the equipment".

"I have found Chinese army soldiers very disciplined. They know their jobs," he said.

Li Lei, from a Chinese Suvorov Attack tank crew, said his foreign counterparts were proactive in training and familiarizing themselves with the competition conditions, and they would go over the fields many times to measure the obstacles and the targets.

"They have a high fighting spirit－which is something we should learn from them," Li said.

The first day of the games started with Suvorov Attack on Monday, with three rounds of contests in which teams from China, Belarus, Kazakhstan and Iran competed. Russia, Venezuela and Zimbabwe competed on Wednesday.

The games also made them think about their strengths and weaknesses, especially when compared with foreign armies.

"From the competition we could learn good tactics from our foreign counterparts and apply them to our own combat training. Through such an event we can also improve our competitive skills and build a good image for the PLA Army." Xu said.