China to step up stress testing for CPTPP, DEPA in Nansha, plan says 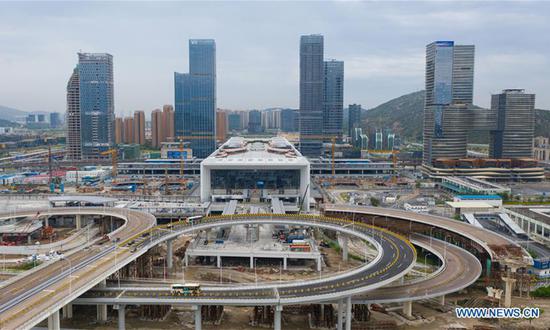 China's State Council on Tuesday released a sweeping plan to build Nansha in South China's Guangdong Province into a "major strategic platform" for global cooperation, with arrangements to step up stress testing for the country's applications to join two major international trade and data agreements.

Under the plan, which aims to further boost the integration and development of the Guangdong-Hong Kong-Macao Greater Bay Area (GBA), Nansha will step up stress testing for high-level international free trade agreements, including the Comprehensive and Progressive Agreement for Trans-Pacific Partnership (CPTPP) and the Digital Economy Partnership Agreement (DEPA).

In a major push for global cooperation, China has applied to join the CPTPP and DEPA.

The Nansha plan aims to build the GBA into a high-quality gateway for opening-up by 2035. In addition to implementing the Regional Comprehensive Economic Partnership, Nansha will follow the rules of international high-quality free trade agreements, such as the DEPA and the CPTPP, the plan said.

Within the GBA, observers said the guidelines mark another step for the integration of the GBA region, after similar policies were launched in Hengqin and Qianhai, which could build the region into a globally competitive Bay area rivaling Tokyo, New York or San Francisco.

In September 2021, China rolled out plans to build a Guangdong-Macao cooperation zone in Hengqin Island and to deepen opening-up of the Qianhai Shenzhen-Hong Kong Modern Service Industry Cooperation Zone.

Liang Haiming, dean of Hainan University's Belt and Road Research Institute, said each of the three places has its specific role in the region. Nansha will be built into a major strategic platform facing the world, eyeing cooperation with both Hong Kong and Macao.

According to the plan, bases of high-tech industries will be fostered and constructed in Nansha, including intelligent manufacturing, digital industry, cloud computing and the Internet of Things.

As a support measure, the connectivity of financial markets will be promoted in an orderly manner. The cabinet said it will expedite a feasibility study on establishing an international commercial bank of the GBA in Nansha, support the reform of foreign exchange management, and explore pilot policies for overseas investment by qualified domestic limited partners.

It will also support institutions in jointly setting up yuan overseas investment funds.

China has vowed to strengthen the function of an international shipping and logistics hub in Nansha, including support for building a joint maritime trading center and an international maritime services industry cluster in Nansha.

According to Liang, it is very necessary to enhance the function of the international shipping logistics hub. Through the linkage of ordinary and high-speed railways, highways, ports and airports in the GBA, the regional logistics alliance can promote the seamless connection between the "Silk Road Economic Belt" and the "21st Century Maritime Silk Road," and promote the construction of the Belt and Road Initiative (BRI).

"This will not only increase China's international influence and voice in the international logistics industry, but also make greater contributions to BRI-related countries and regions in coping with the challenges of the epidemic and achieving common development," said Liang.

As of April, nearly 2,500 kilometers of railways were in operation in the GBA, with the length of expressways reaching 4,972 kilometers, statistics from the Guangdong provincial government showed.

The integrated development of logistics of the GBA facilitates the logistics at ports and their hinterlands, an official of the Guangdong customs said in April, which marked the seventh anniversary of the Guangdong Pilot Free Trade Zone (FTZ).

According to customs statistics, under the "GBA port connect" mode, import and export enterprises have reduced the overall cargo clearance period by 60 percent and customs clearance costs by about 30 percent.

Faster logistics via air, sea and road services in the GBA have greatly boosted trade in the Guangdong FTZ region, analysts said.

To accelerate the development of the GBA, the central government said that from 2022 to 2024, 10 billion yuan of new local government debt will be allocated to Nansha every year.

"To build the GBA into a world-class bay area, it needs to learn from the practices of Tokyo and New York, and work together to promote enterprises in the GBA to actively seize the international market," Liang said, advising firms in the region to further cooperate with markets along the BRI routes, so as to expand their share in the international market.