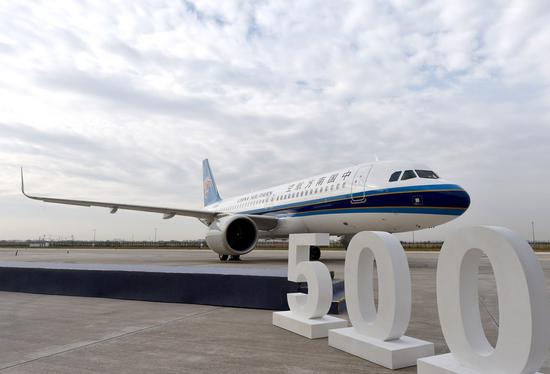 The A320neo airplane was delivered to China Southern Airlines, a leading airline carrier in the country.

In 2008, a joint venture of the A320 final assembly line was set up in Tianjin to meet surging demand from Chinese customers. It is the third location of Airbus's A320 family production facility and first outside Europe. It delivered its first A320 aircraft in 2009.

China is the largest single-country market for Airbus, accounting for about one-fifth of its global deliveries.

"It took our Tianjin final assembly line four years to deliver the first 100 A320 family aircraft, while from the 400th aircraft to the 500th, it only took two years. It shows the speed of China," said Xu.

Amid the COVID-19 pandemic, Airbus China was among the first batch of enterprises to resume work in Tianjin with the support of the local government, Xu said. Despite the epidemic and sluggish global aviation industry, he saw huge potential in the Chinese market.

China recently vowed to establish a "dual circulation" development pattern, in which domestic and foreign markets complement and reinforce each other, with the domestic market as the mainstay.

The "dual circulation" development pattern will give Airbus great opportunities since China has a growing middle-class population with increasing consumption ability, Xu said.

China maintained the world's second-largest civil aviation market, with 660 million passenger trips in 2019, a year-on-year increase of 7.9 percent, according to the Civil Aviation Administration of China (CAAC).

China's civil aviation sector, one of the industries hit the hardest by COVID-19, is regaining momentum, with fuel added by the country's effective epidemic control and reviving economy.

The aviation sector in the country recovered in September as key indicators reported visible improvements. Airlines flew a total of 47.75 million passengers on domestic flights, up from the previous month and representing about 98 percent of the volume registered in the same period last year, according to data from the CAAC.

Amid challenging times for the global civil aviation sector, industry players around the world are paying close attention to China's wider opening-up and large market.

"China is the second-largest overseas market of Air France KLM and the largest in Asia. We are delighted and honored to resume our passenger flights to China, which marks a big step in rebuilding our global network," said Toon Balm, general manager of Air France KLM Greater China.

Air France KLM has been playing its role in bridging the air cargo between China and Europe to ensure efficient transportation of vital supplies and maintain the global supply chain.

"Although there are still many uncertain factors in the future, Airbus is confident of the recovery of China's aviation market and the overall economy," Xu said, adding that the company will continue to integrate into the development of China's aviation industry and establish a long-term and win-win strategic partnership with China.