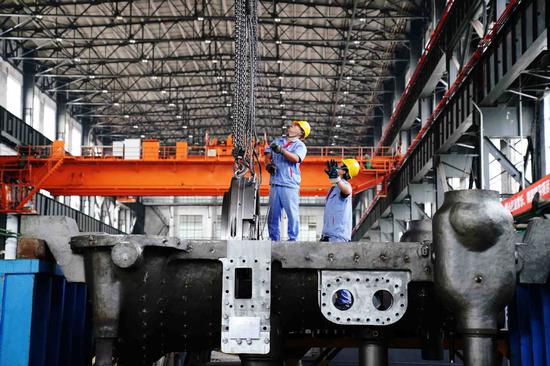 Employees work on the production line of a steam turbine manufacturer in Harbin, capital of Heilongjiang Province. (Photo/Xinhua)

Li's remarks came as he presided over a State Council meeting that solicited suggestions from economists and business leaders on the annual Government Work Report to be delivered in March.

The premier said China could be faced with an even more complicated and challenging domestic and international environment this year, and more targeted policies and measures must be adopted to cope with the challenges.

The government must further tighten its belt and cut its normal expenditure, especially administrative expenses, by a large margin, to ensure that systematic tax cuts can be fully implemented and the basic public livelihood can be ensured.

He underlined the importance of maintaining reasonably sufficient liquidity during the implementation of a prudent monetary policy, with stronger measures to improve its transmission mechanism, so that the financing difficulties faced by small and medium-sized enterprises can be effectively alleviated.

The government will continue with an employment-focused policy and prioritize efforts to expand channels for job creation and support flexible employment, he said.

The government must minimize its direct intervention in the market to provide a more enabling environment for business operations and to create more businesses, he said, adding that market players have a key role to play in withstanding the downward pressure on the economy.

The premier also highlighted the significance of further tapping the potential of domestic consumption and giving play to the strength of China's vast domestic market.

He urged proactive efforts to develop community services such as elder care and day care for infants, and to strengthen weak areas in infrastructure and urban facilities.

It is also important to move forward with the renovation of old residential communities to expand effective investment and harness the momentum of growth, he said.

Among the attendees were Gao Peiyong, vice-president of the Chinese Academy of Social Sciences, and Lei Jun, founder and CEO of Xiaomi Corp.

Gao urged the government to make its cuts in expenditure part of its institutional arrangement, while Lei called upon the authorities to scale up measures to attract foreign professionals to work in China.